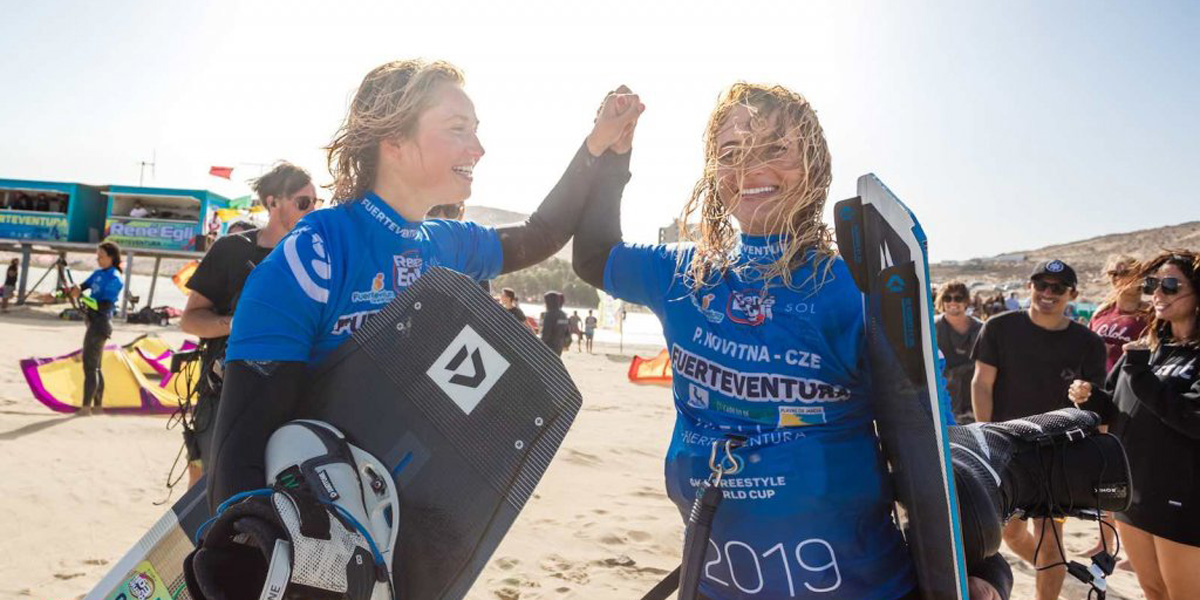 Yesteday Paula Novotna won the GKA Freestyle World Cup Fuerteventura at the end of an epic day packed with trials and tribulations in challenging conditions! Here’s how it went down..

Yesterday Paula Novotna won the GKA Freestyle World Cup Fuerteventura at the end of an epic day packed with trials and tribulations in challenging conditions! Here’s how it went down.. 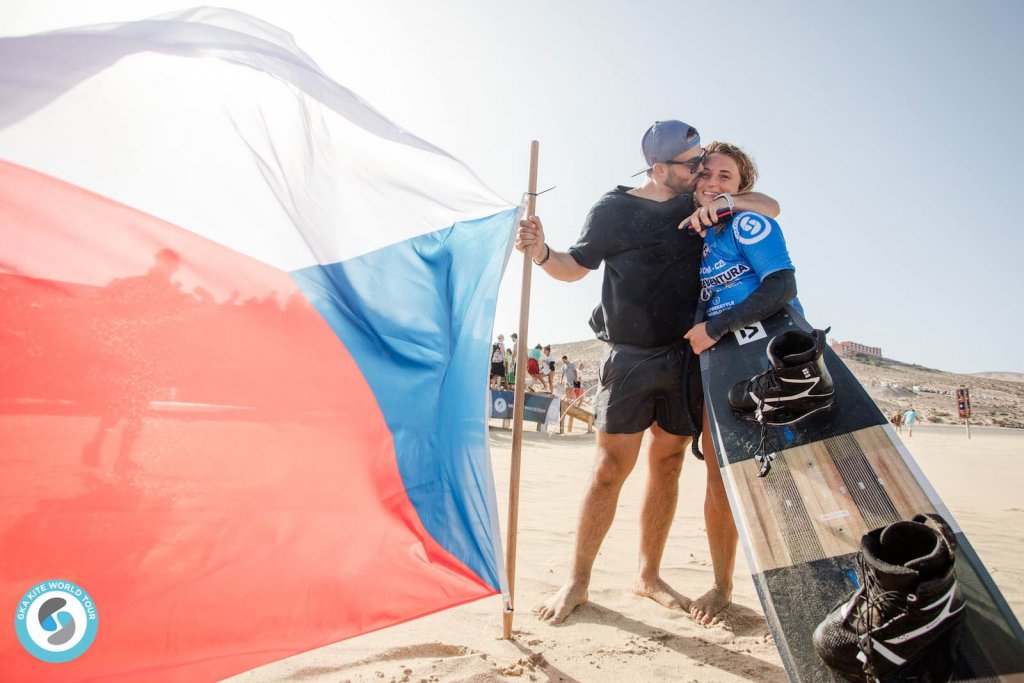 Bruna had to work hard to pull this one round, but some steady scores and her own high scoring slim chance secured her a victory in her opening heat. It was close though, and a very impressive heat from Swedish rider Lambrecht. 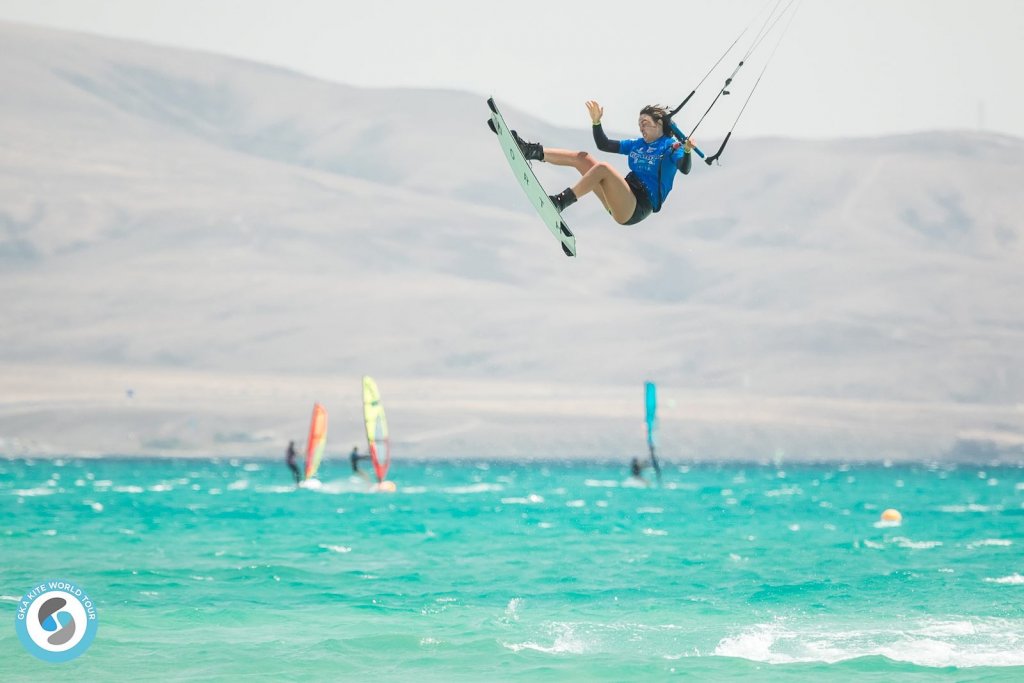 Francesca was far more measured though and a slim chance (another slim!) gave her the edge. Realistically, if Pippa had stuck some of her wilder efforts she might have won this one and her hinterberger frontside 3 will have given Francesca something to think about. 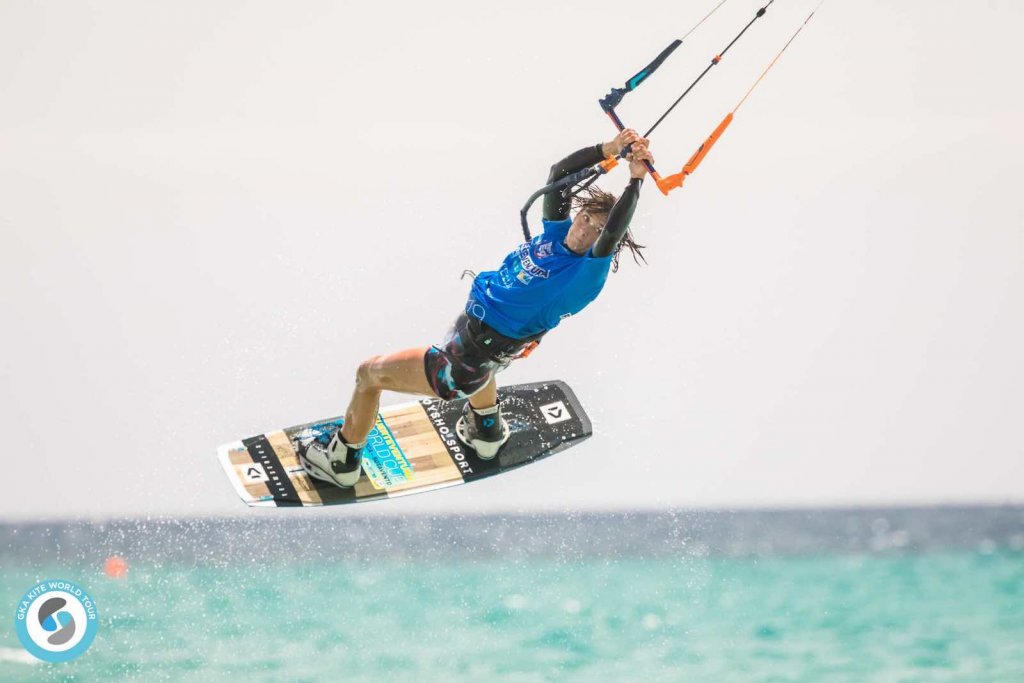 Paula Novotna won the third heat with a very complete performance. She was near faultless and only put a foot wrong once with a scrubbed landing on the way out of a back to blind.

Rita Arnaus took second after a slow start to finish ahead of Therese Taabbel. A heart attack on her final trick brought her closer to Paula, but the Czech Charger Novotna rounded out her heat with a 313 and frontside 3 hinterberger and there was no way anyone was catching her. 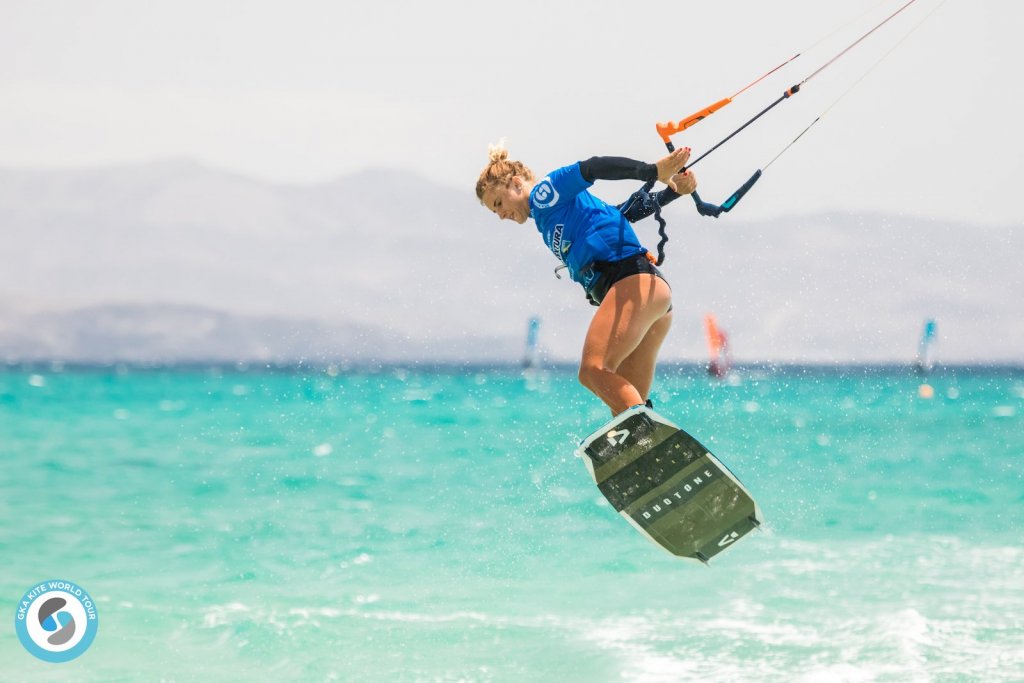 Mikaili Sol won the final heat of round one, giving a glimpse of what she’s capable of, but it was by no means a polished display. She scored big with a 315, a sizeable slim chance and a heart attack but she crashed her four other trick attempts.

She got through on sheer technical ability, but she’d need to clean up her act to win in the later rounds. 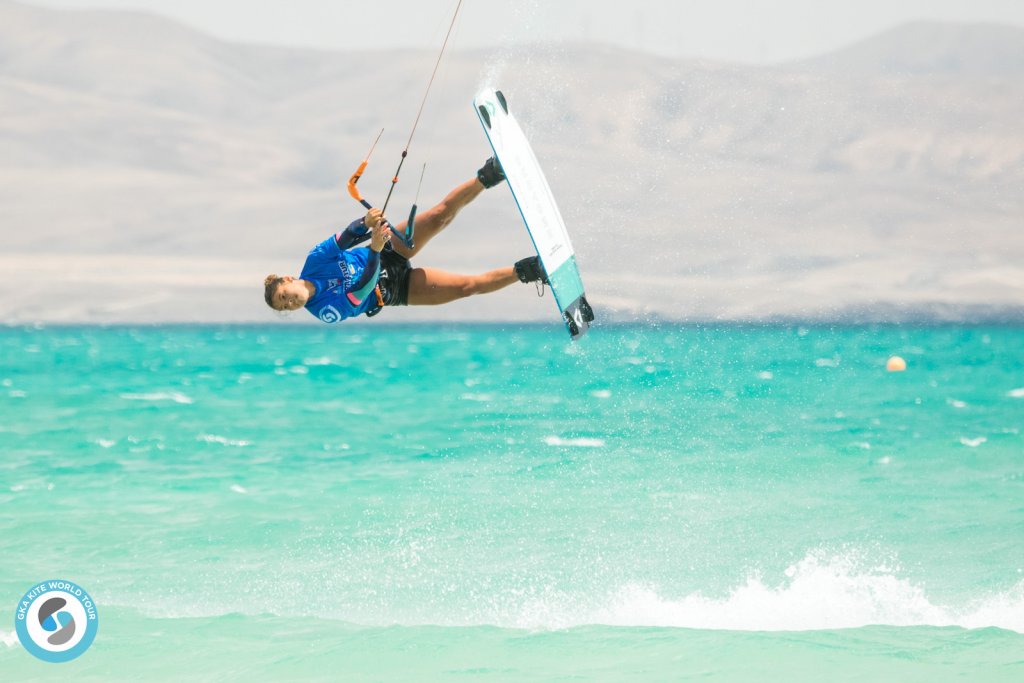 Round two saw the conditions really begin to ramp up. Local rider Alexandra Torres impressed, winning the first heat to progress through to the semis alongside Maureen Castelle in second.

In the second heat of the round, Nathalie Lambrecht sustained a heavy backside crash which temporarily knocked her out cold and she had to be helped from the water by the safety sled before being checked over in the back of an ambulance.

Thankfully she was ok, but her event was over and Therese Taabbel won the heat ahead of Pippa van Iersel in second 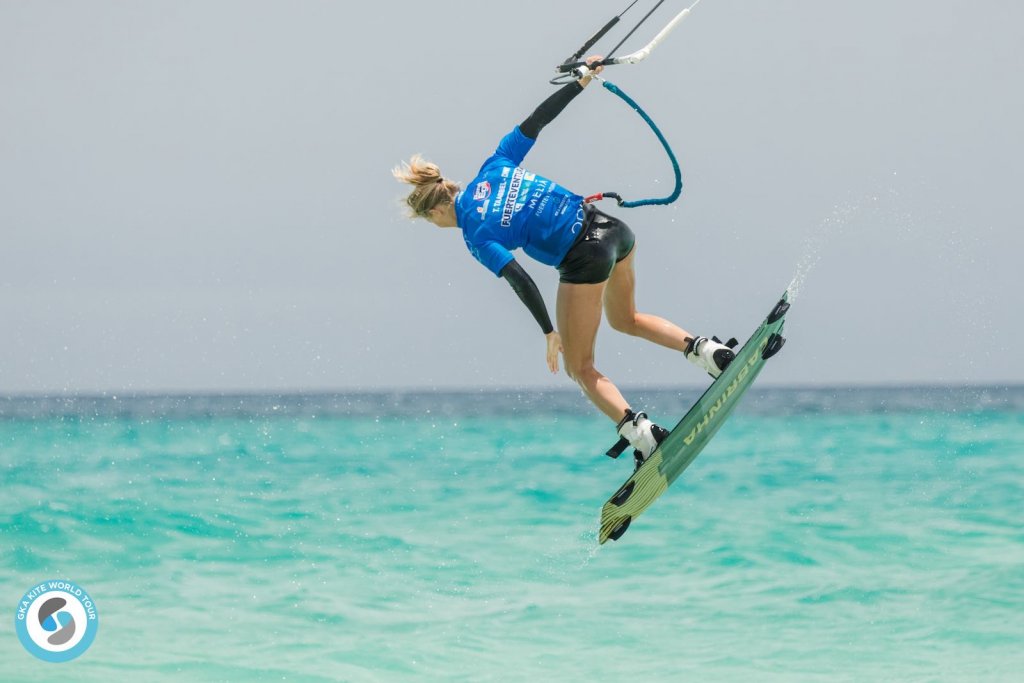 This was where things got really challenging, with winds gusting up to 35 knots and steadily building chop. It was clear that some of the riders hadn’t trained much in conditions like this, but some were having less trouble than others.

Bruna Kajiya looked unshakeable in the first semis heat, leading from start to finish and a tight duel between Francesca Bagnoli and Pippa van Iersel came down to the wire with Francesca just missing a slim chance (which would have moved her into second if she’d landed it) which meant that Pippa would progress through to the final. 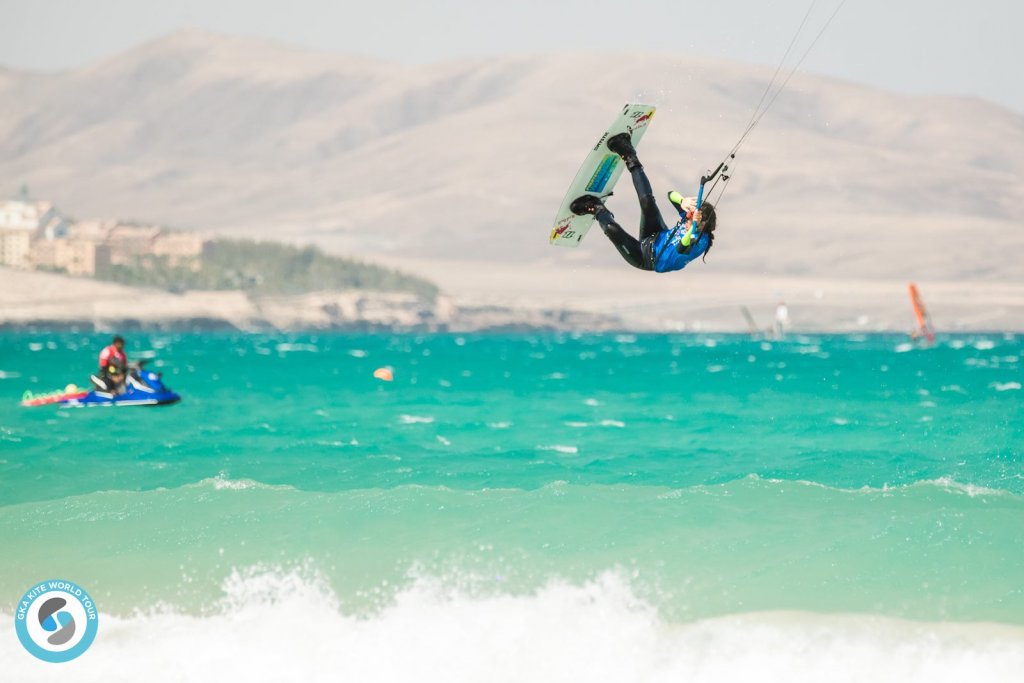 The riders weren’t getting it any easier in the second semi-final heat, and at times it was a case of just unhooking, edging, and hoping that a gust didn’t hammer you before you went for a trick.

Watching Mikaili Sol, you might have though she was riding in a different heat though. She landed the highest score of the round for a backmobe (8.07) and the gusts weren’t phasing her it seemed.

She took first with Paula Novotna in second and then it was on to the final! 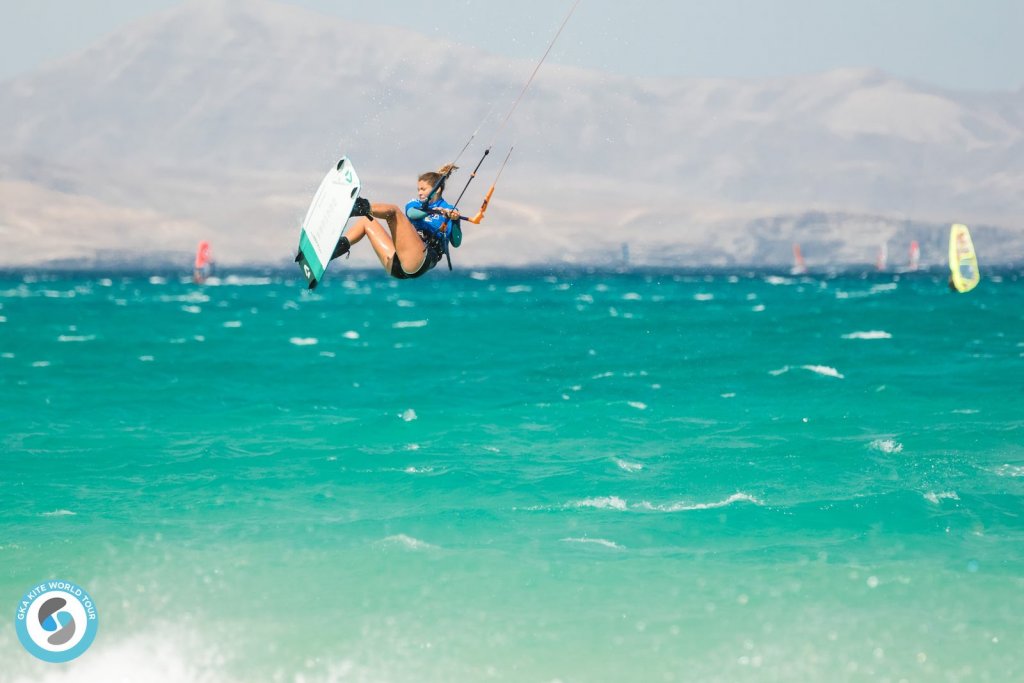 Two former World Champs in the form of Mikaili and Bruna, spirited Dutch ripper Pippa and an absolutely firing Paula Novotna. This was going to be good!

Paula opened with a blind judge and Pippa hit back with a BS 313. The riders were all on smaller kites, which are of course much quicker, so they were finding it hard to ride out of tricks without their kites overreacting to their steering input but some of them were making it work.

Bruna and Mikaili just couldn’t seem to nail their landings and Mikaili then took a heavy slam on her third trick and was clearly in pain, holding her ear as she spoke to her trainer Fabio on the beach. 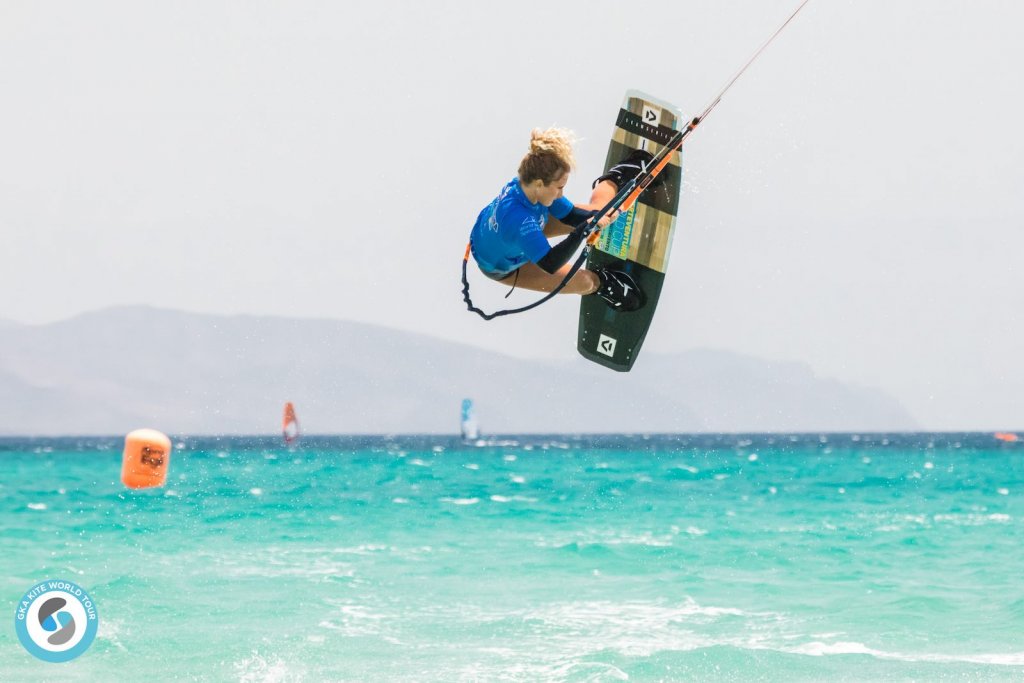 She headed back out but wasn’t landing any tricks and, other than a tiny score for a very small raley, after six tricks she had next to no points on the board.

Pippa van Iersel had managed to land an s-bend to blind which added to her high score from her first trick to further solidify her position in second but Paula was absolutely running away with the heat.

She landed another 313, which would have been enough to win on its own, but she then added an ultra-powered blind judge 3 close to the shore to give herself a 12.33 point lead as the other riders came in for their last tricks. 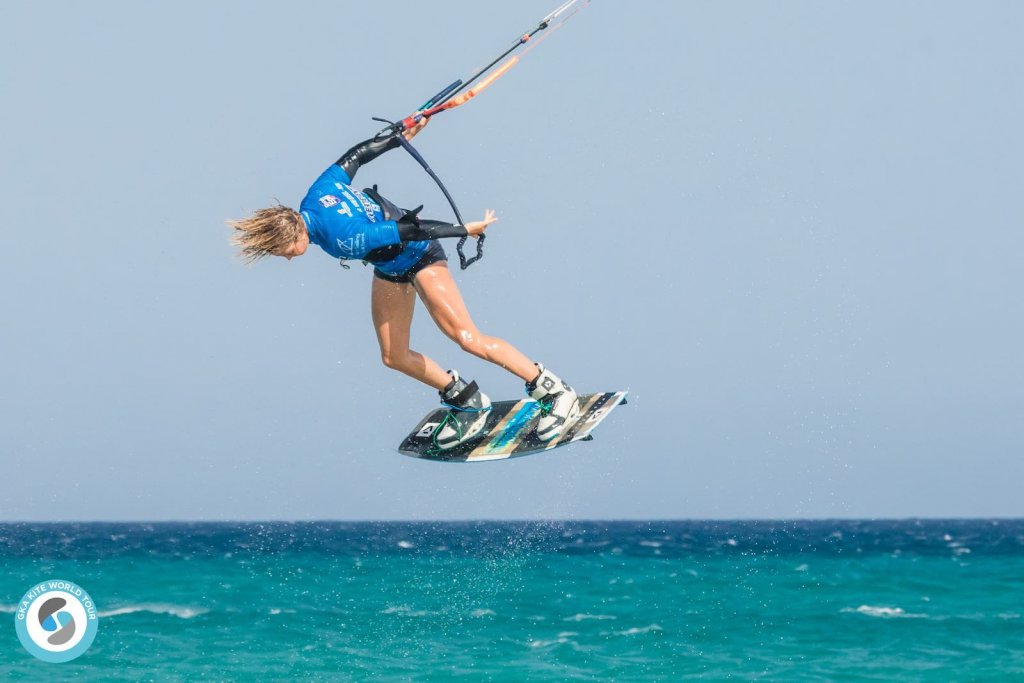 She was now unbeatable, and Pippa was safe in second, so who would take third?

Bruna landed a blind judge on her sixth trick attempt so it seemed like she was going to take it, and Mikaili was seemingly starting to unravel and could be seen on the beach discussing with her coach whether or not she should even continue with the heat.

However, like the warrior she is, she wasn’t about to quit just yet. No safe scores would do, it was all or nothing, and nobody could have expected what was to come. She lined up, edged, and then only went and landed the highest score of the day – a MASSIVE heart attack for 9.1 points! 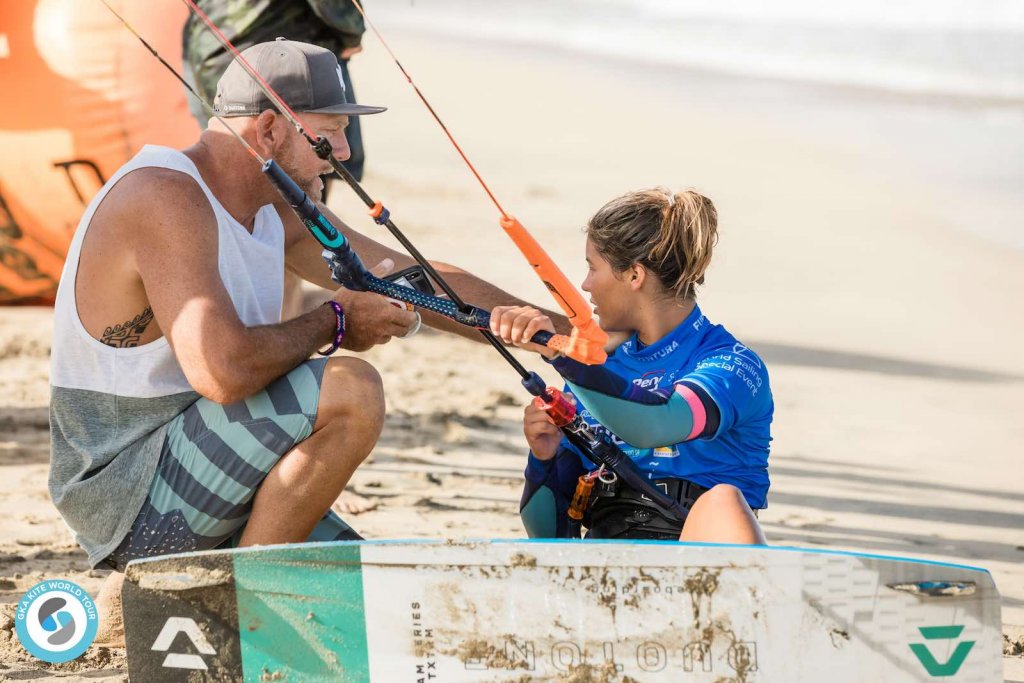 It was enough for third and, although it wouldn’t be enough to wrest second from Pippa, it still meant she’d made it to the podium.

A heroic effort in the face of substantial odds, and what a result for Paula who was the standout rider from the very start today and so deserved her victory. 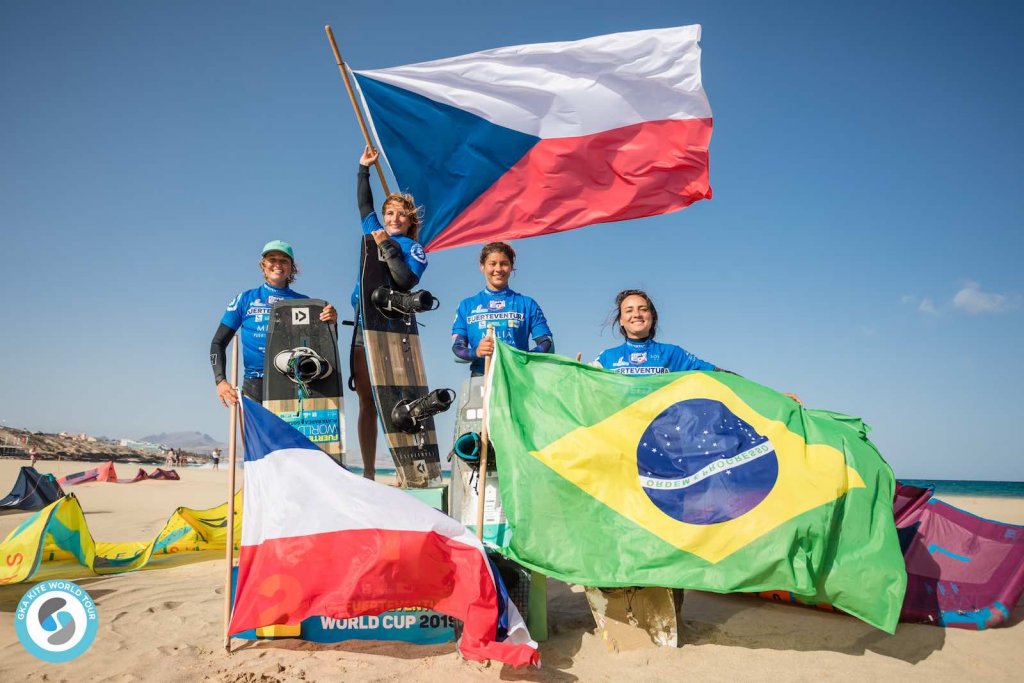