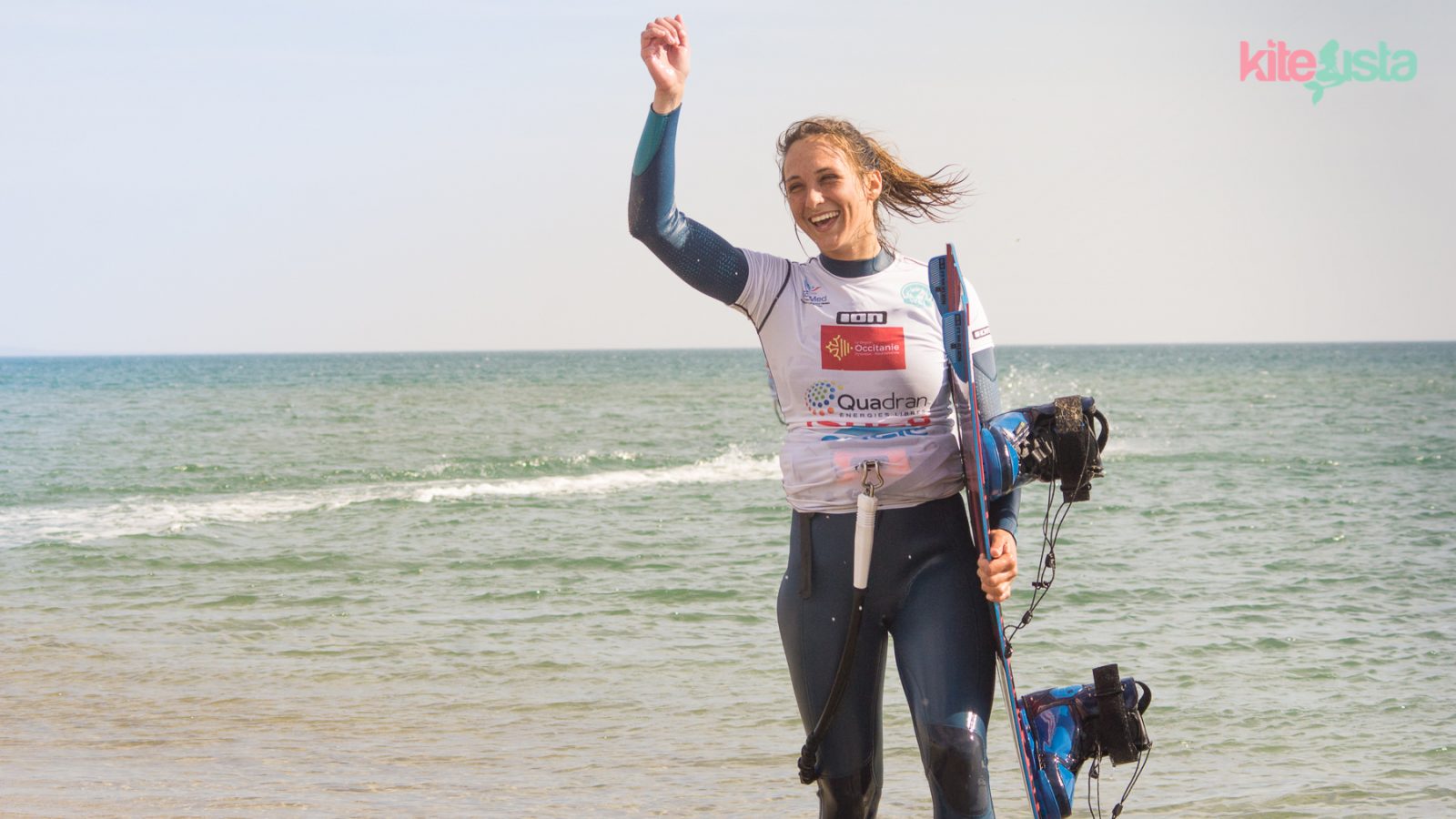 Today was the start of the main competition and after an early start we were certainly not left disappointed as the days events unfolded.

Today was the start of the main competition and after an early start we were certainly not left disappointed as the days events unfolded. 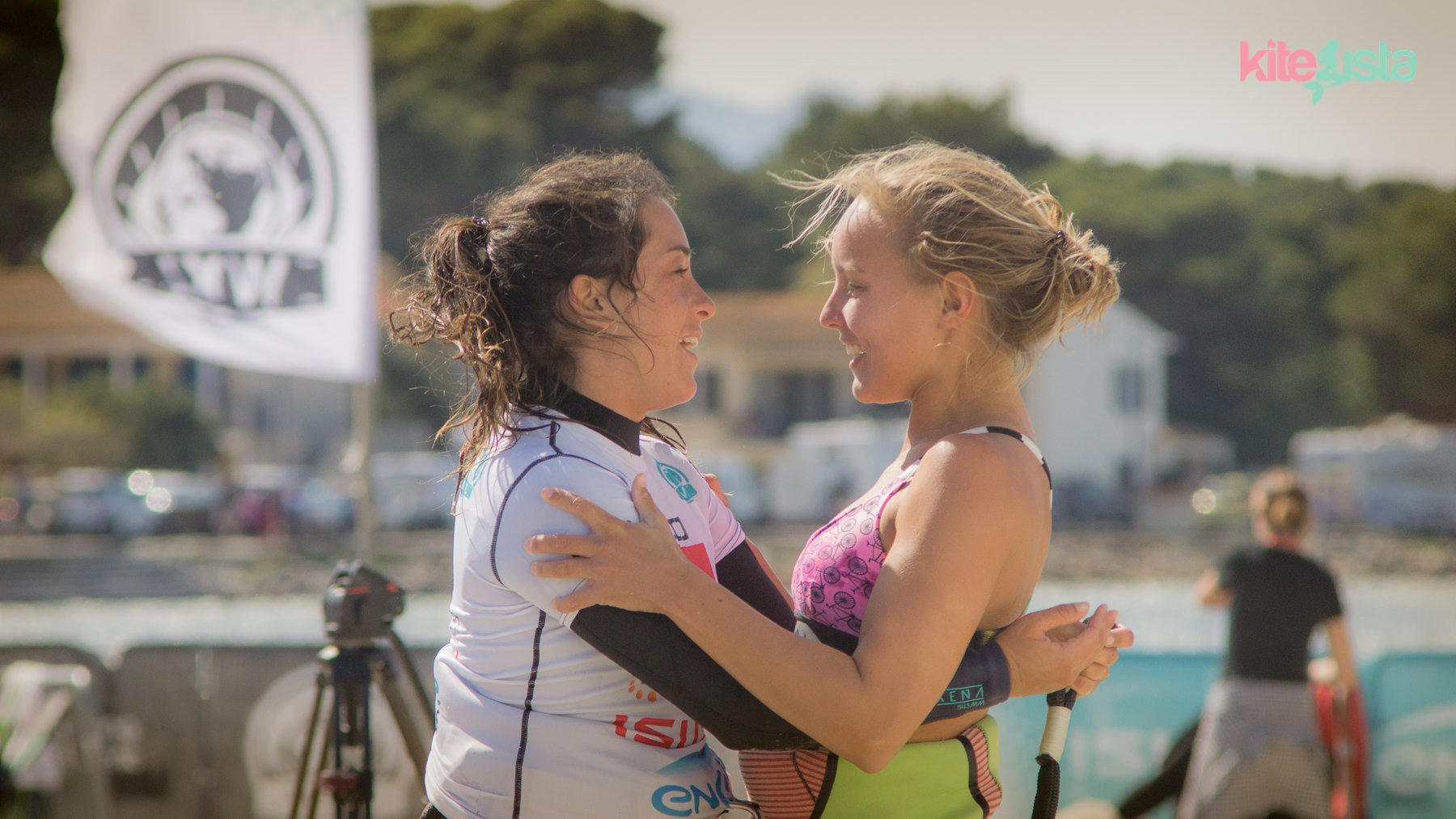 Heat one was a very close call between Annabel van Westerop and Maureen Castelle with the freshly qualified Maureen from New Caledonia riding exceptionally well and on the water a good fifteen minutes before anyone else warming up. Annabel started extremely well with two high scoring tricks but it was Maureen’s consistency throughout her tricks which just allowed her to edge out Annabel and go straight to round 3.

Rita Arnaus just couldn’t find her rhythm and finished third after notching up four crashes even though she did land an impressive back to blind but lived to fight again in round 2. 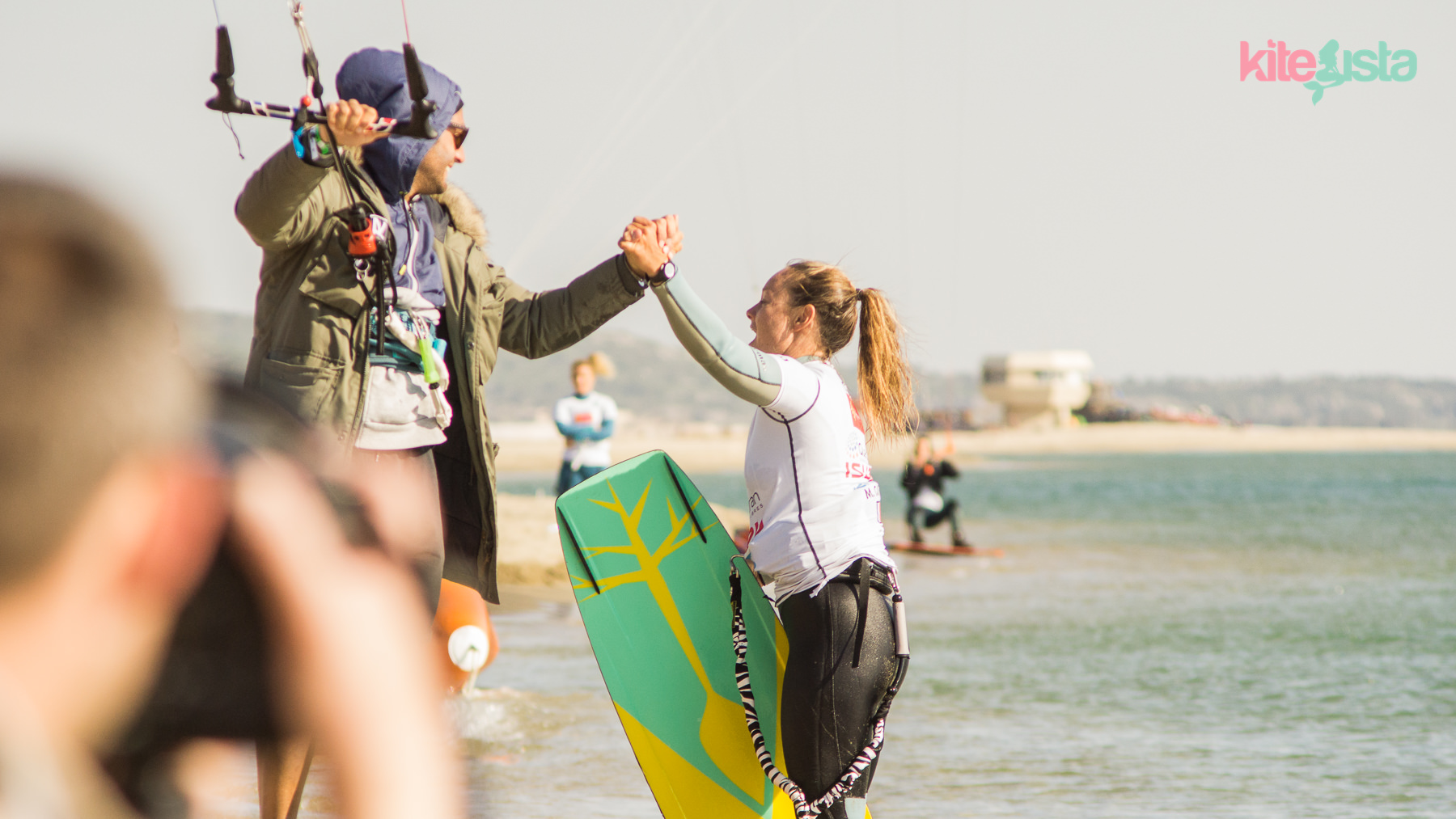 This heat was a really close call all the way to the last trick with Francesca Bagnoli going toe for toe against Therese Taabbel, but it was a sensational heart attack scoring the highest female score so far of the competition at 8.67 which clinched the victory for her which with all scores over 7 and a slim chance of 8.1 was a tough loss for Therese after such a strong heat.

Hannah Whiteley had a shocker with the wind as she got stuck downwind out of the box on her 7m and was unable to get back quick enough, twice having to be given a taxi ride by the safety boat. This threw her off and although she came back and landed a nice s-bend to blind once she had her 9m, it was just not enough so her and Therese get to fight again in round 2 and Francesca went straight to round 3. 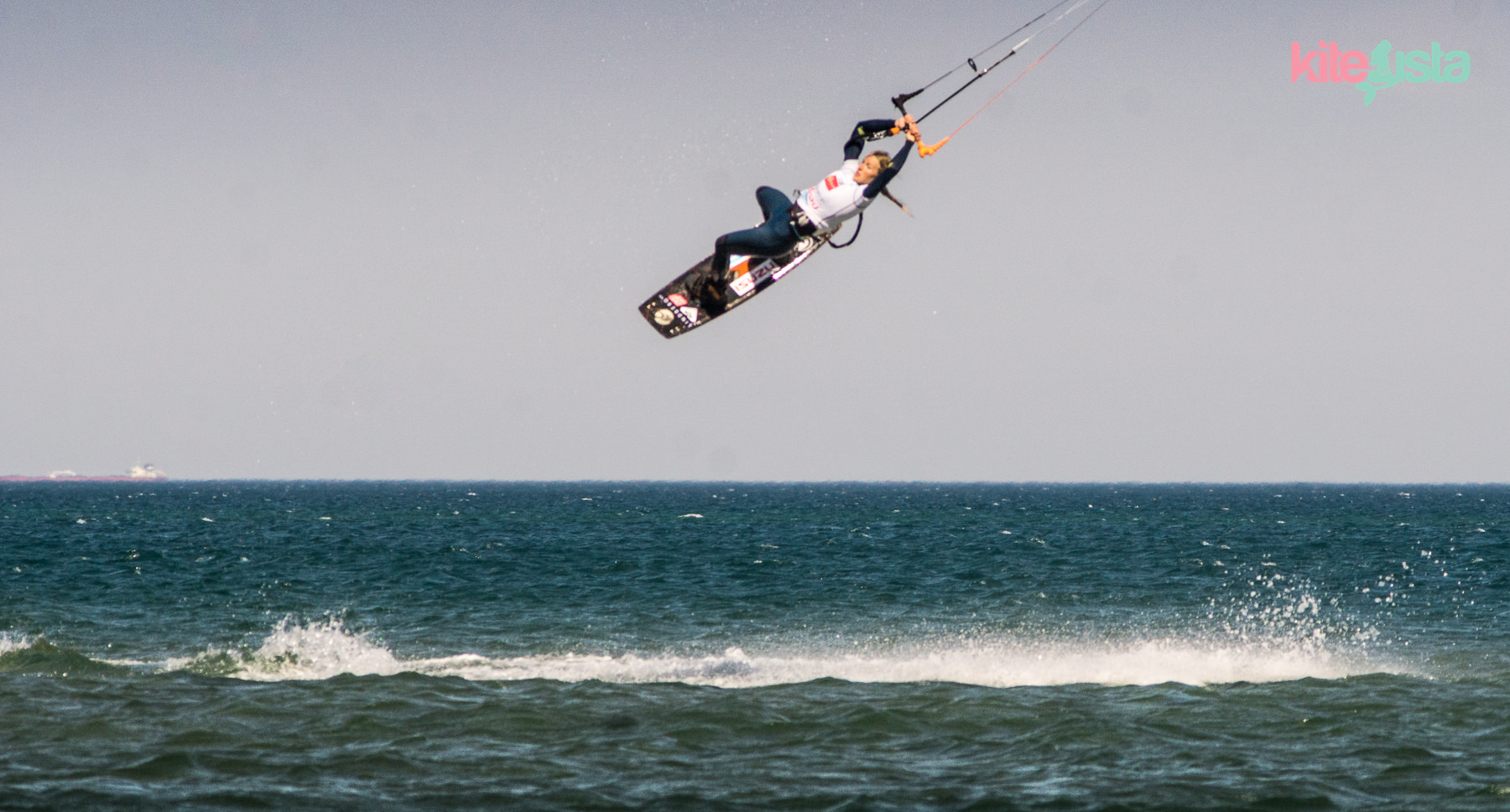 This was a much closer affair with it coming down to the last tricks for two riders but it was Paula Novotna who had started very strong and continued to land her tricks who walked away with this one earning her place in round 3.

Pauline Valesa started strong landing her first three trick, but then just could not get the wind and points she needed to give her a solid fourth trick score and it was a final slim chance for the impressive Vera Klabbers that clinched her second place with both girls going on to fight again. 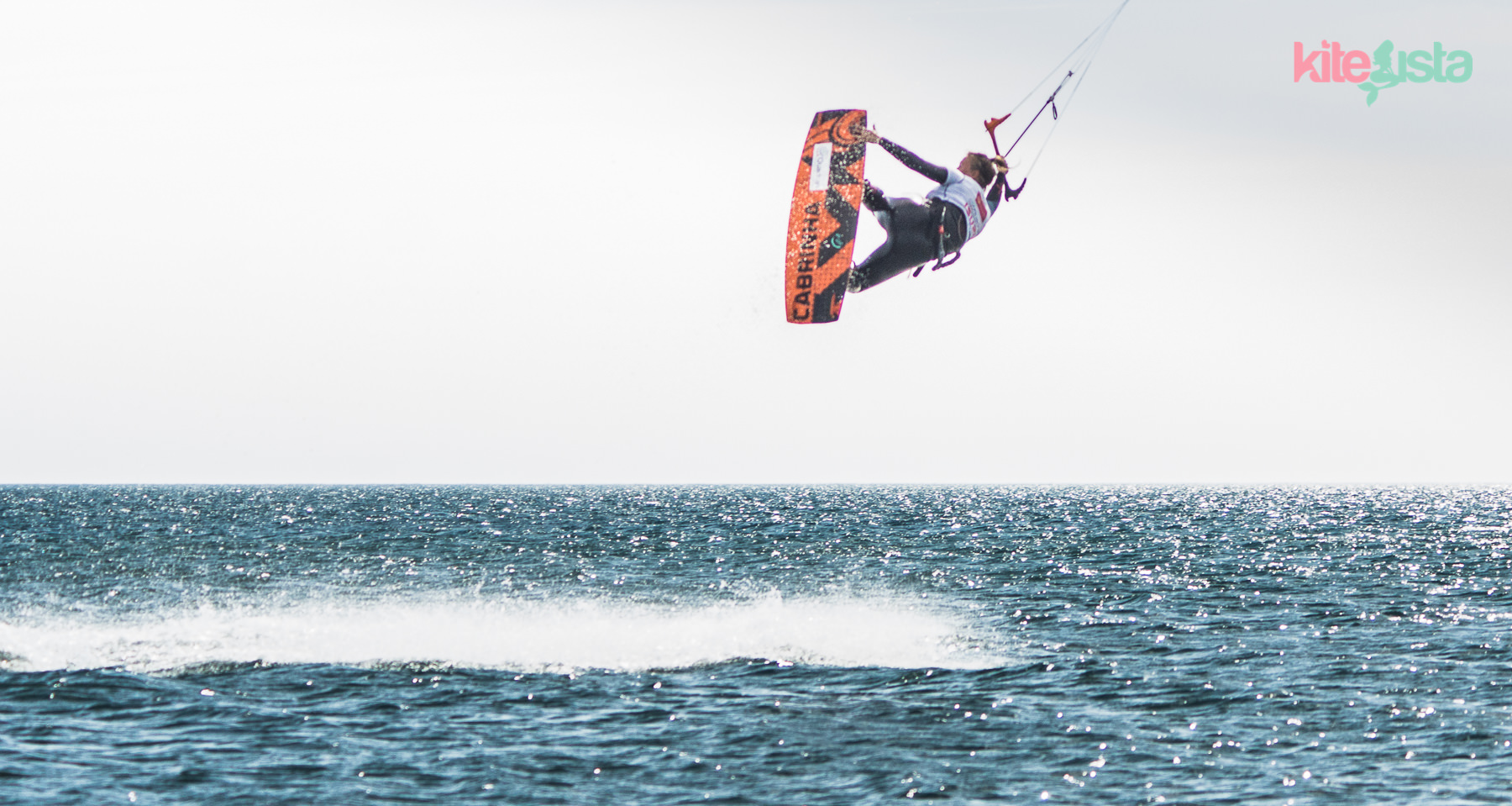 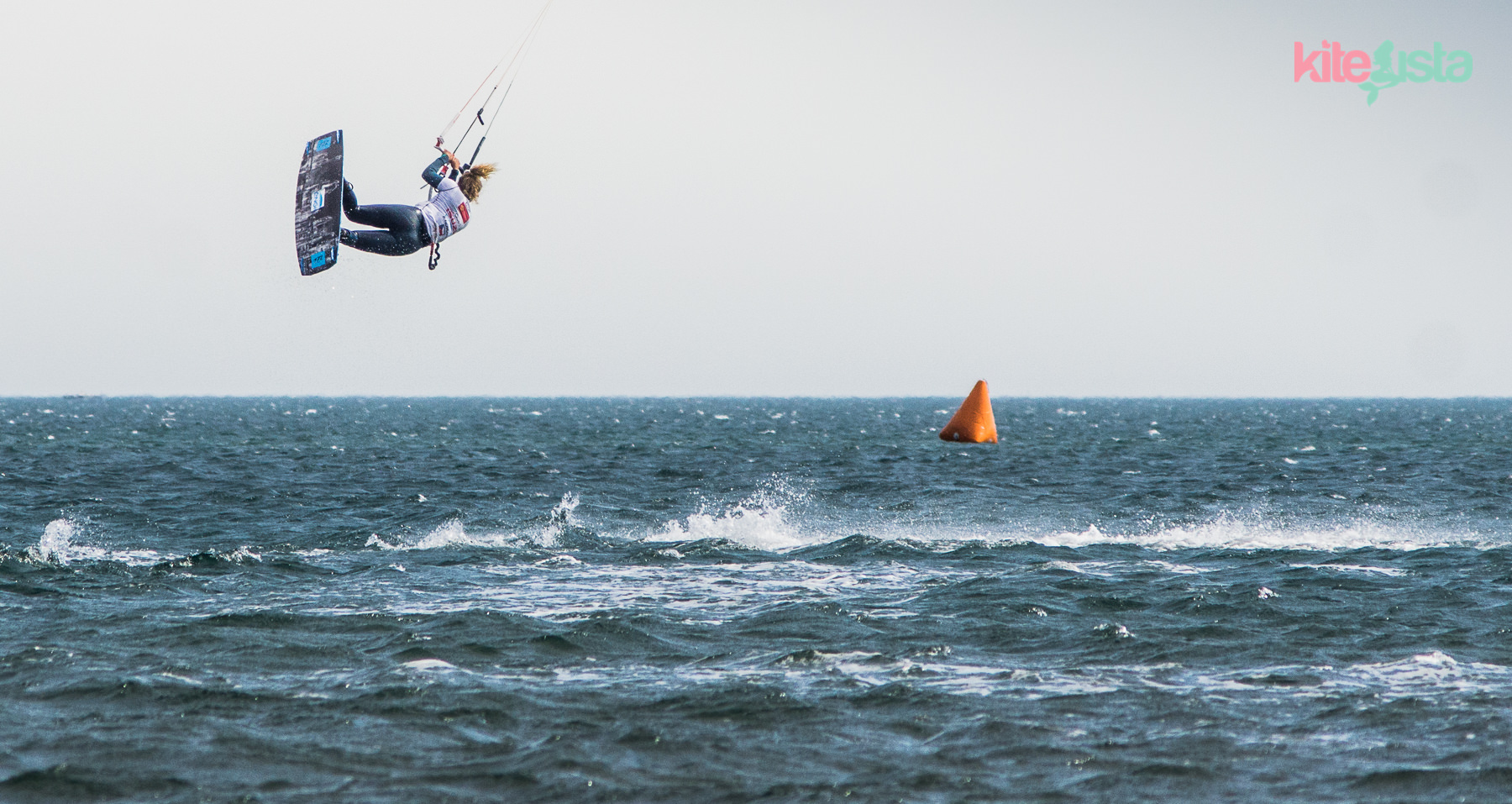 Heat four saw the first real upset of the day and Annelous Lammerts came out all guns firing to her high scoring back mobe and then follow it up with an 8.4 scoring slim chance which just gave her the points advantage of the favourite and current champion Bruna Kajiya. Bruna had four solid tricks but not with scores she would have liked to edge out the jubilant Annelous.

Liloo Fourre got her tricks on the board but just failed to get the points needed to contest her competitors as like all the girls she struggled with the wind conditions and also picked up a finger injury in the process. 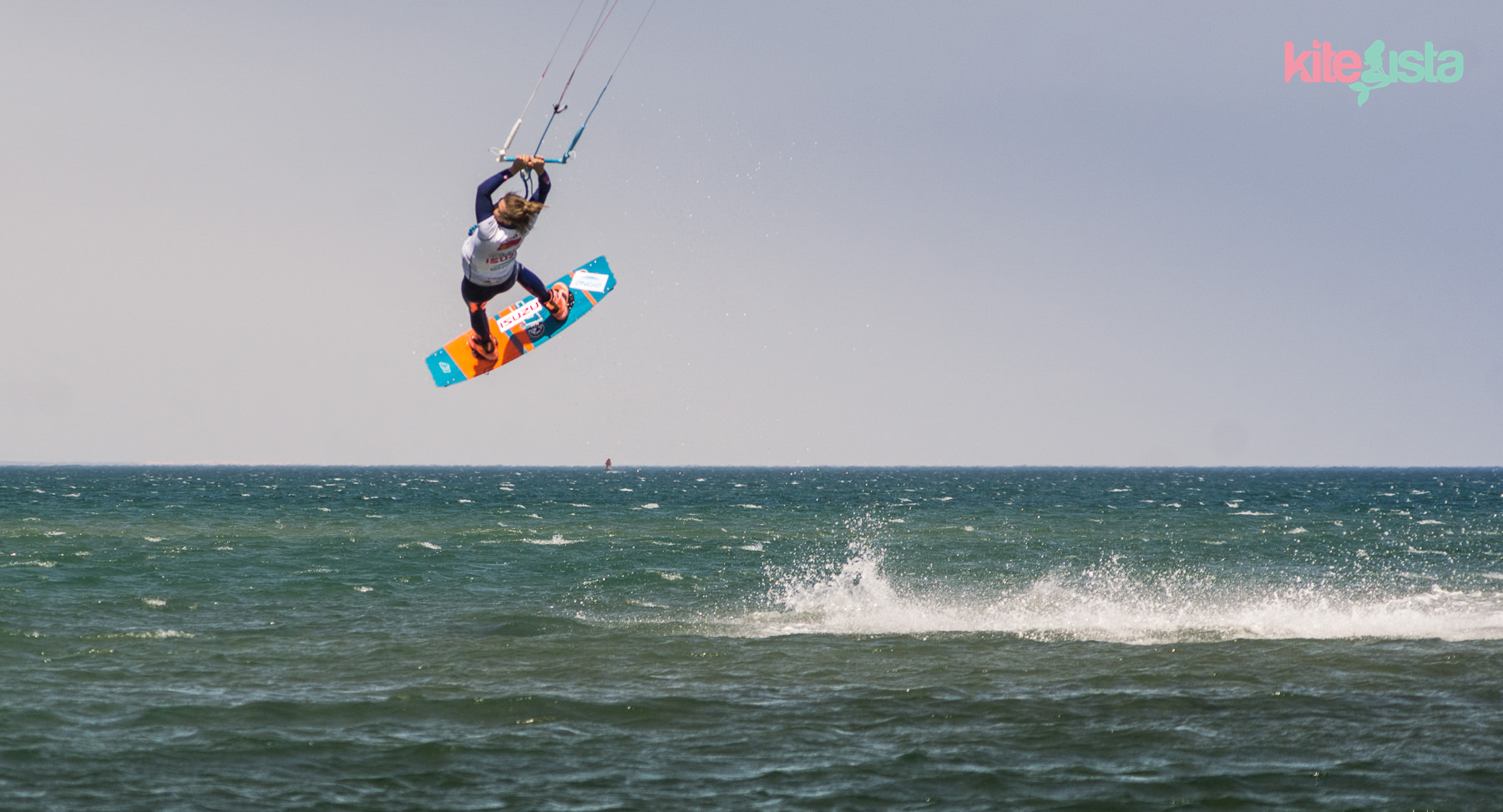 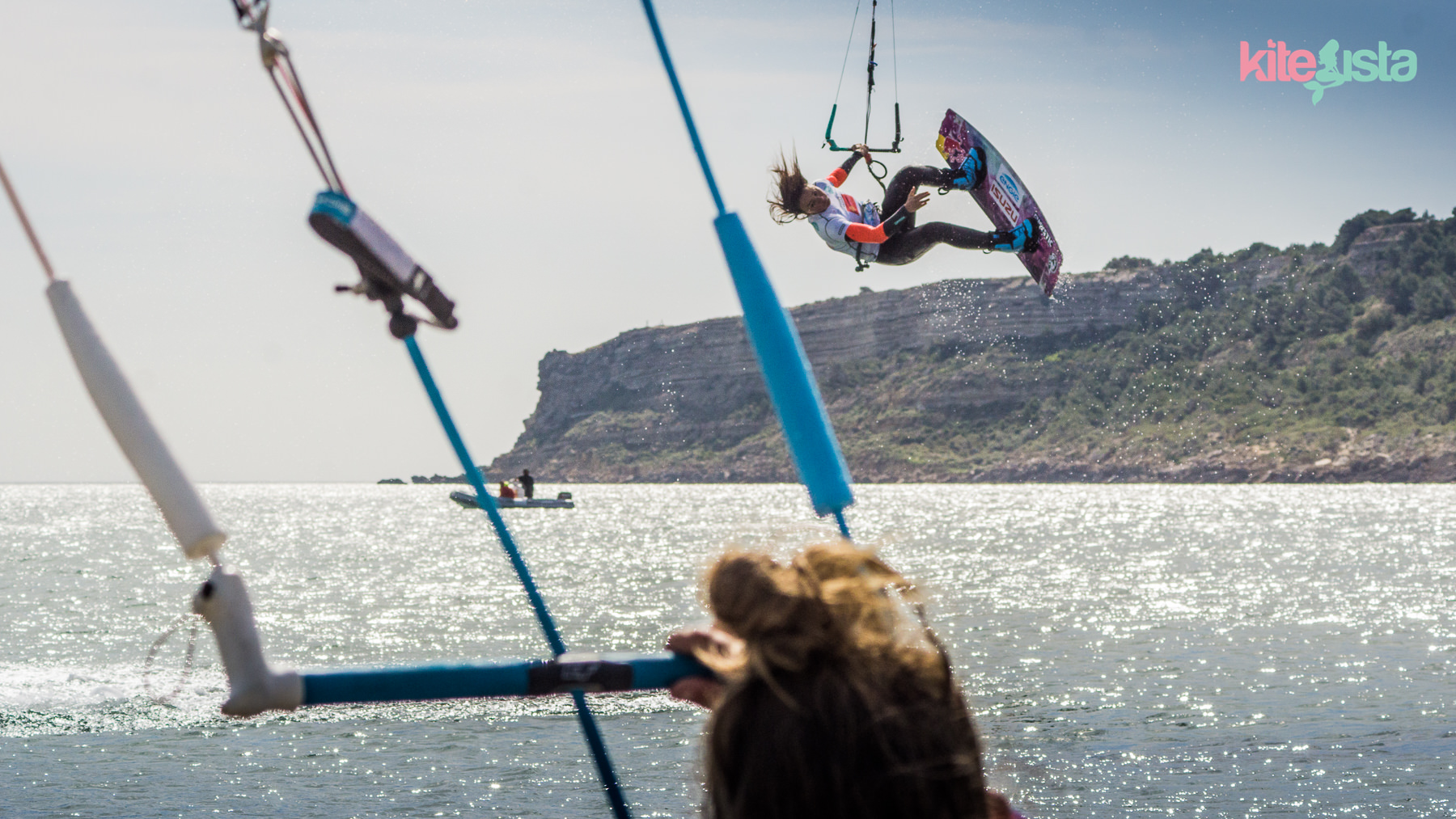 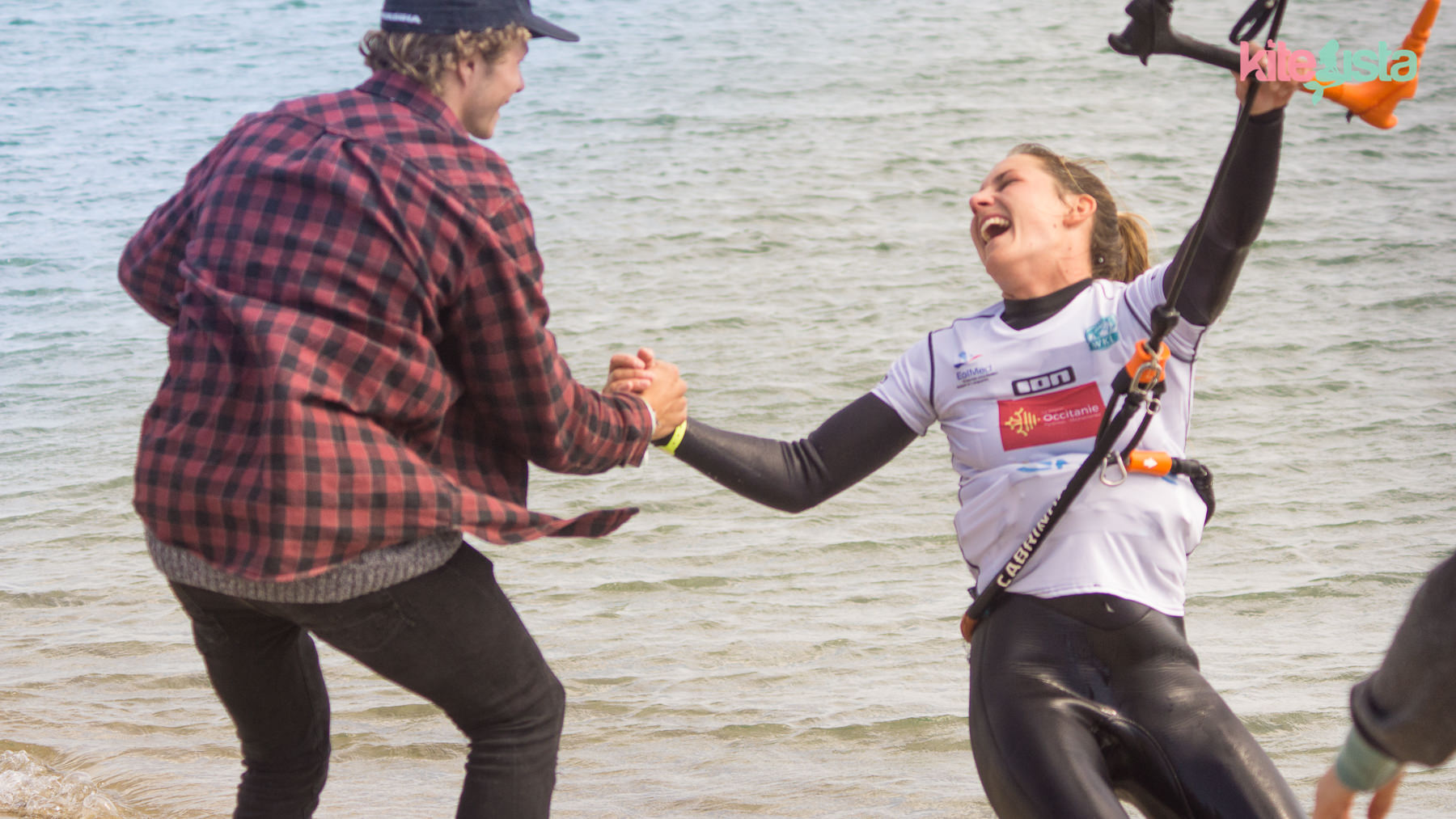 As round 2 got underway the tension mounted as only the top two girls in each heat go through and we get to the sharp end of the competition. The wind picked up and the girls were switching between 7m and 9m and the strong wind came and then dropped between tricks.

She may have been taken by surprise by Maureen Castelle this morning, but there was no denying Annabel van Westerop the win and her place in the final. An 8 point slim chance as her second last trick sealed it, but she rode a strong heat from the beginning and sealed the victory.

With two crashes from the outset it looked to not be Hannah Whiteley’s day but she stayed focussed and managed to get the maximum four strong tricks which counted and gave her the place she wanted in the semi-finals.

Liloo Fourre and Vera Klabbers had a close battle for the position of third place but it was Liloo who came back from a very hard crash that saw her come out of her boots who took the win on the last trick with a hinterberger mobe as Vera who started well finished with three crashes. 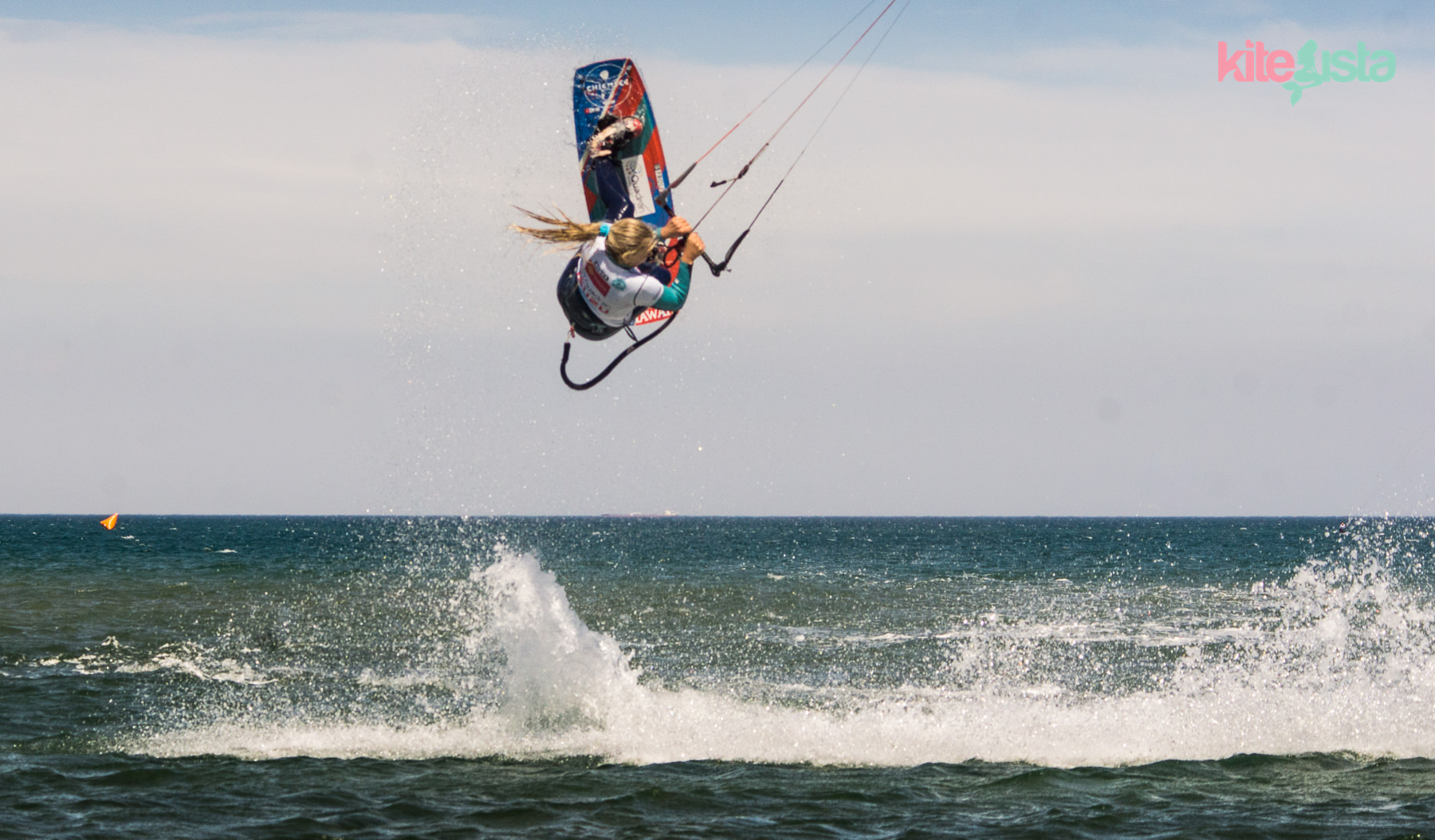 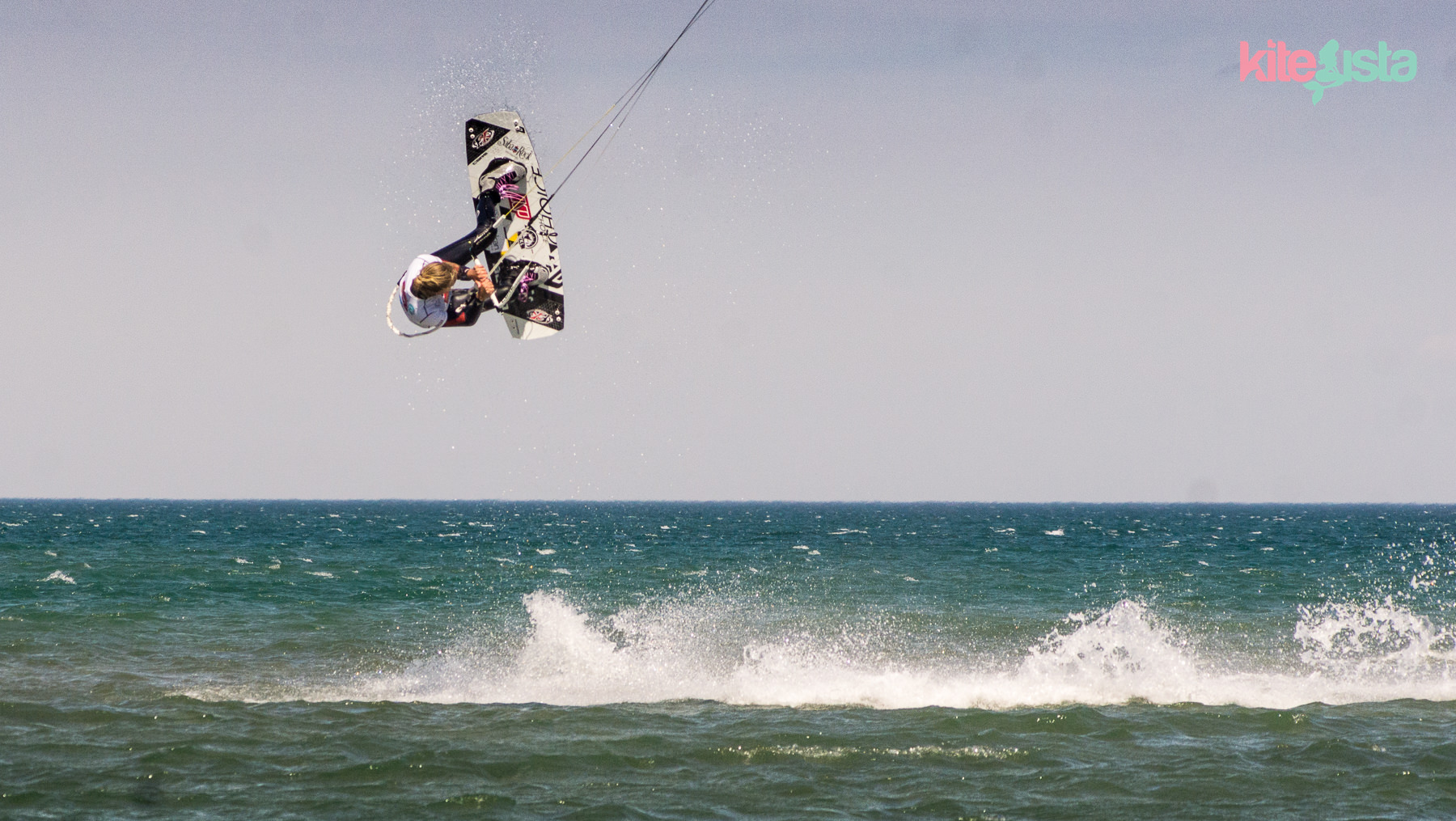 Bruna Kajiya is the kind of competitor you don’t beat easily and after likely being surprised to find herself in round 2 she did not hesitate to show just why she is world champion with the highest heat score of the day and two tricks scoring in the 8’s to seal her place in the next round.

It was Rita Arnaus who then managed to stay focussed during the onslaught from Bruna and get a strong four tricks on the board finishing with an 8.43 slim chance that even outscored Bruna’s best trick in the heat and gave her a well deserved place in the semi finals.

Pauline Valesa had what can only be called a lousy start to the heat with three crashes but she picked herself up and then went on to land three tricks in a row with a nice s bend to blind which left the battle with Therese Taabbel down to the last trick for third. Therese just didn’t manage to string her heat together also struggling with the kite changes and in the end although both girls crashed their last tricks, it was Pauline who came away with the third place. 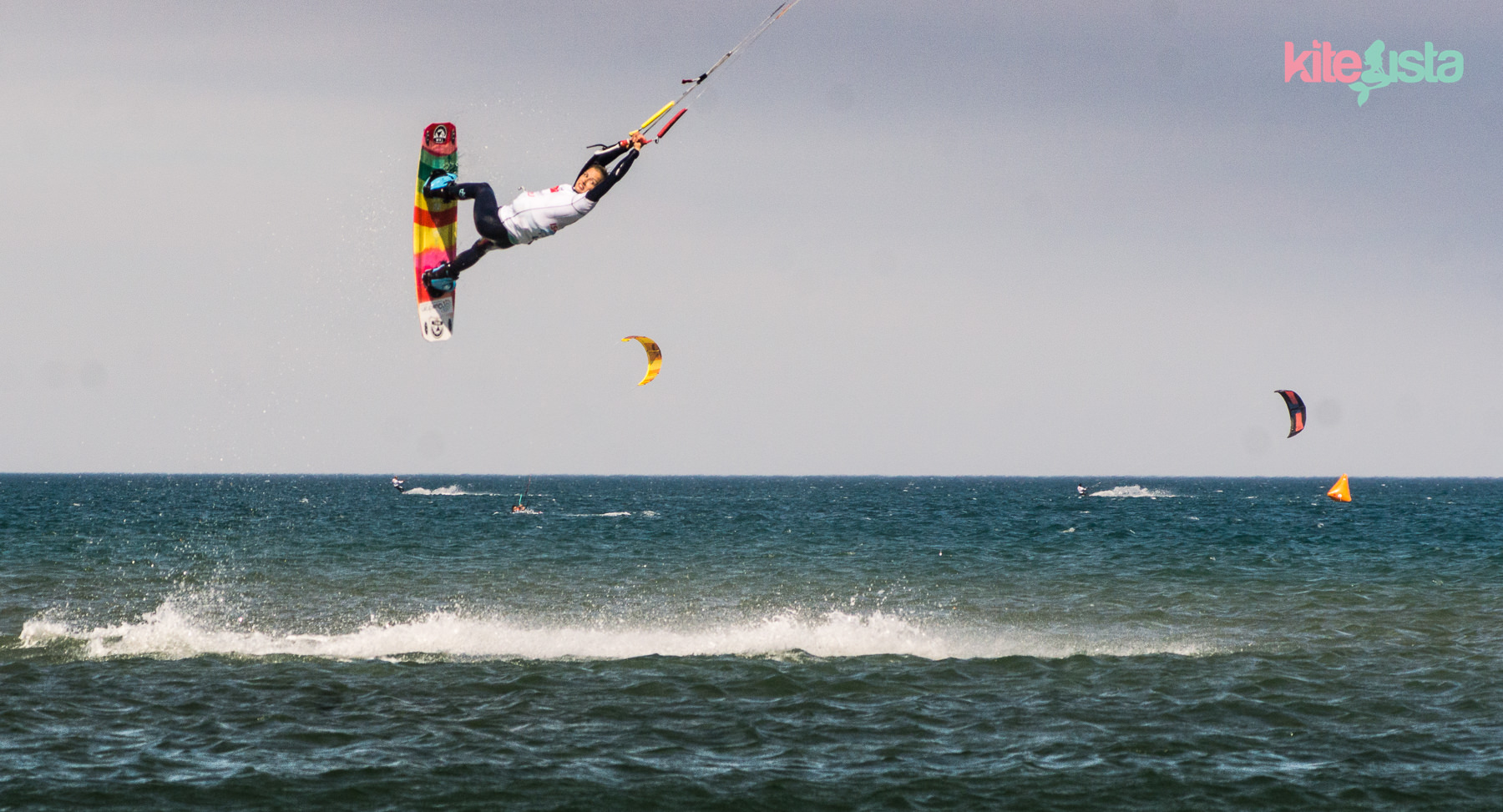 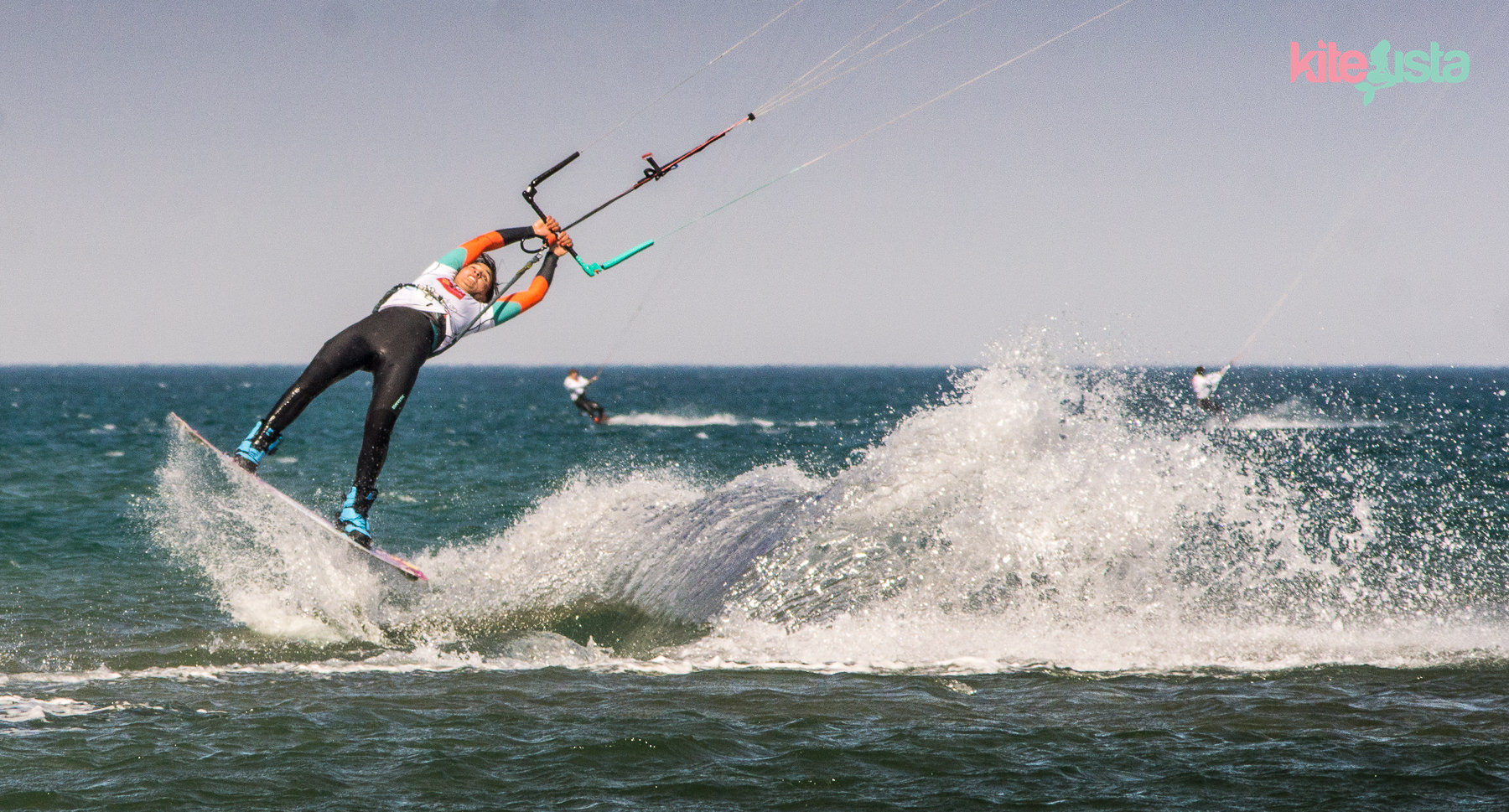 This means that tomorrow see two semi-finals as follows:

Don’t forget to also check out all of the photos on the official World Kiteboarding League Facebook page by the talented Svetlana Romantsova. 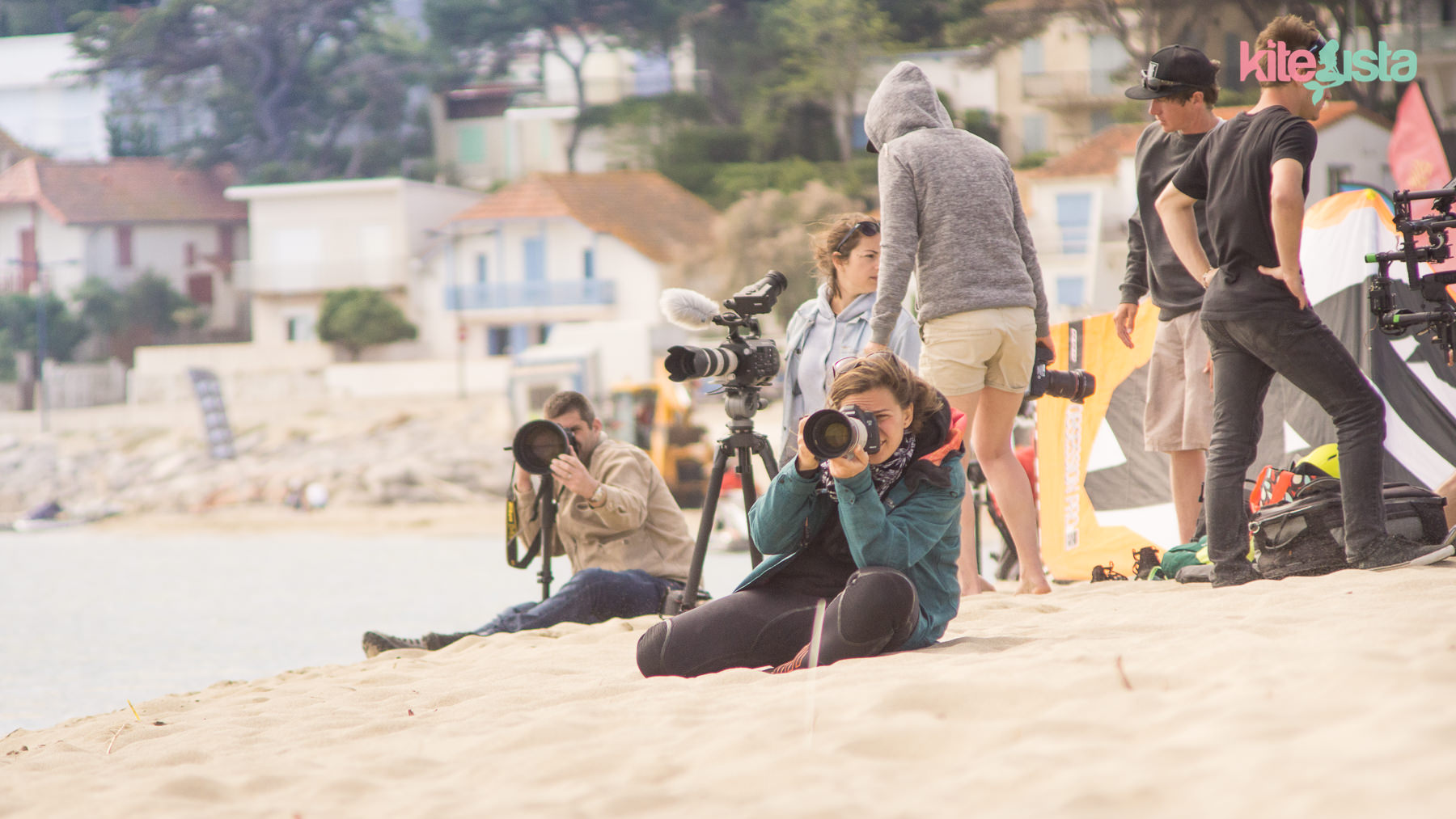