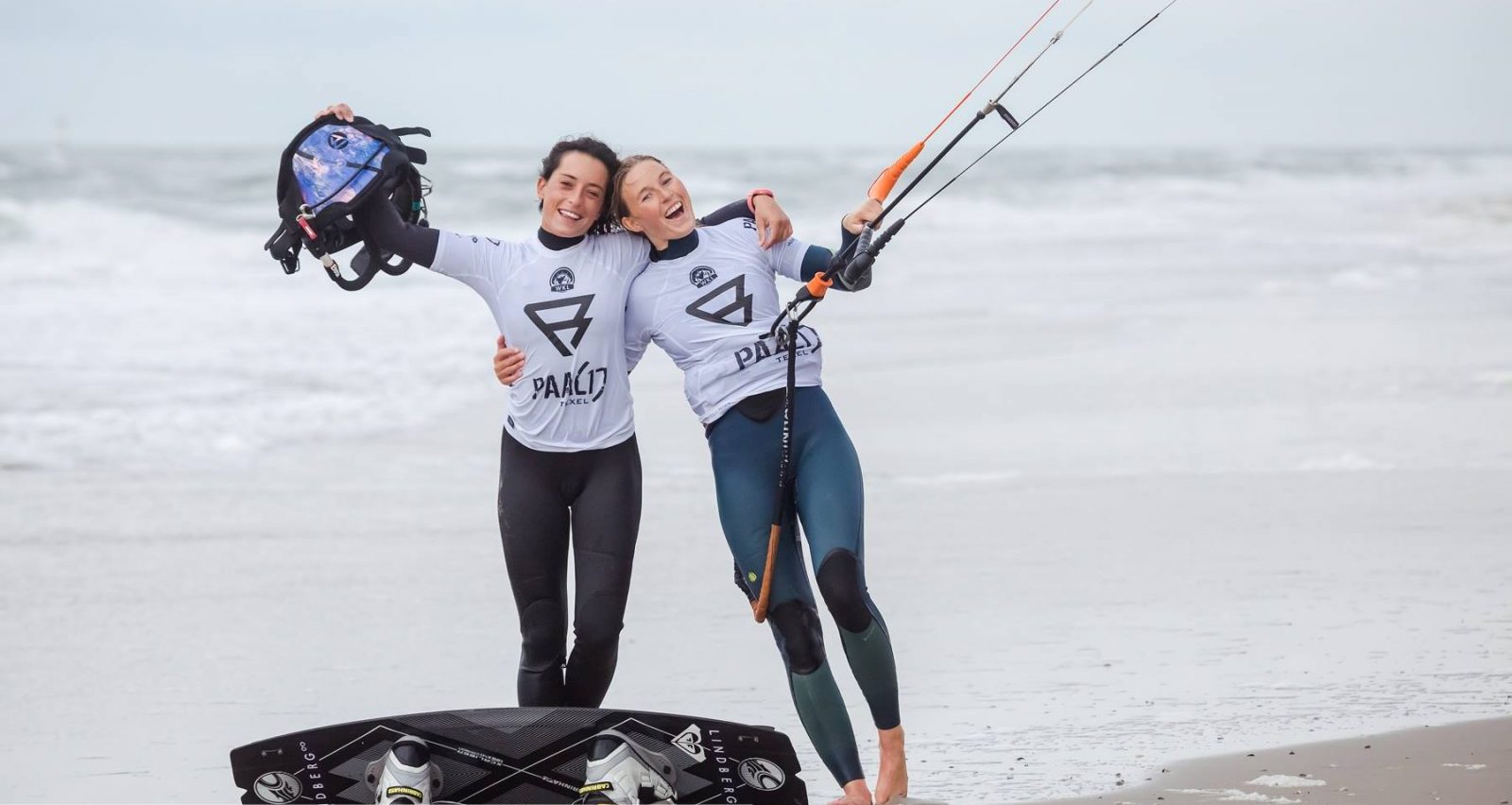 Yesterday saw girls competition in the Qualifier League event for the World Kiteboarding League in Texel. the complete run down of what went down heat by heat here.

Yesterday finally saw some girls competition in the Qualifier League event for the World Kiteboarding League in Texel. Due to the wind conditions and the need to run the Elite League there would only be one round and the final results decided from that, but it mean’t that everyone got a chance to ride, score some points and show the spectators what they could do. 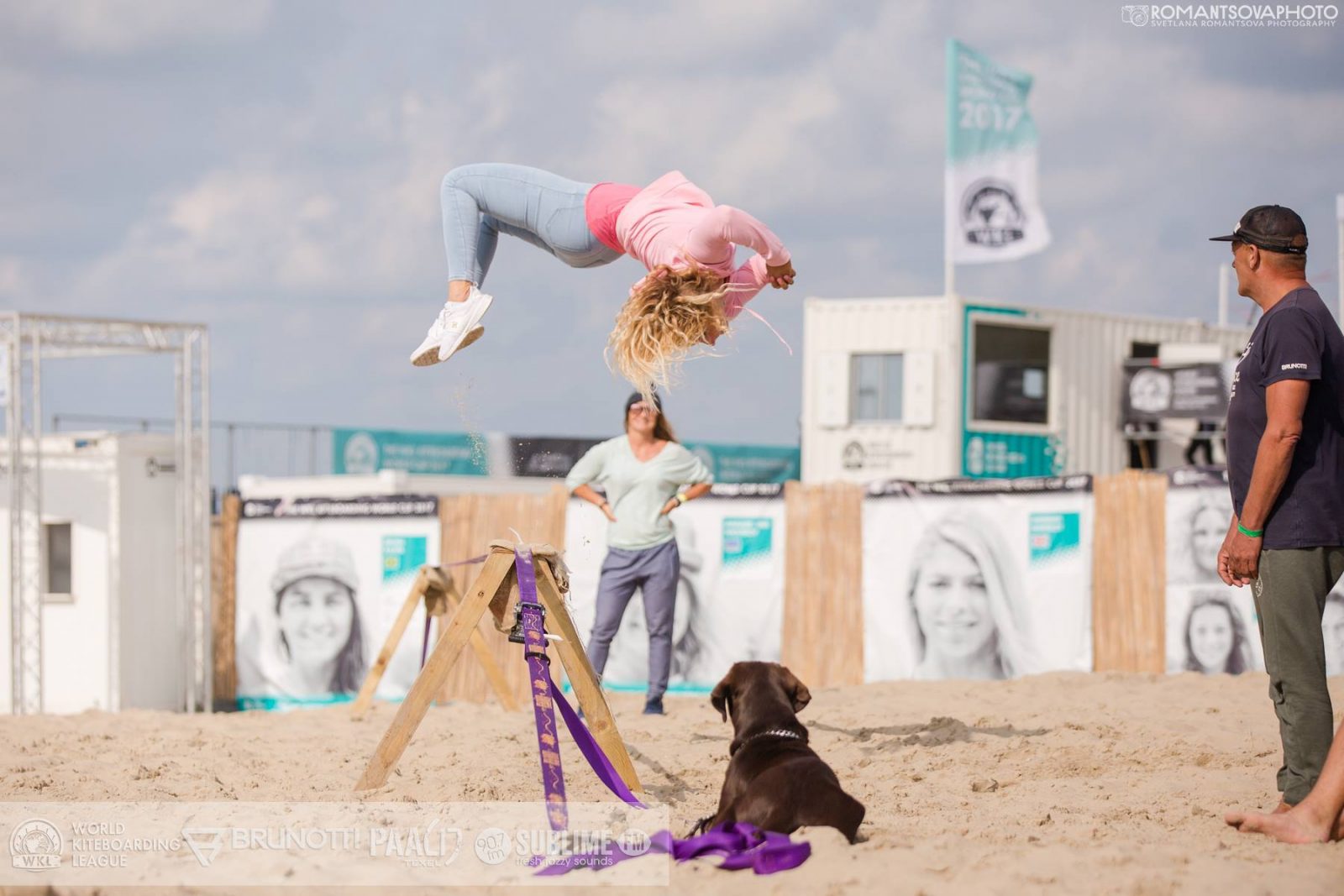 The winds were light but with some tasty kickers the girls still had the ability to throw down their best tricks and reward the spectators who had spent the day waiting on the beach. 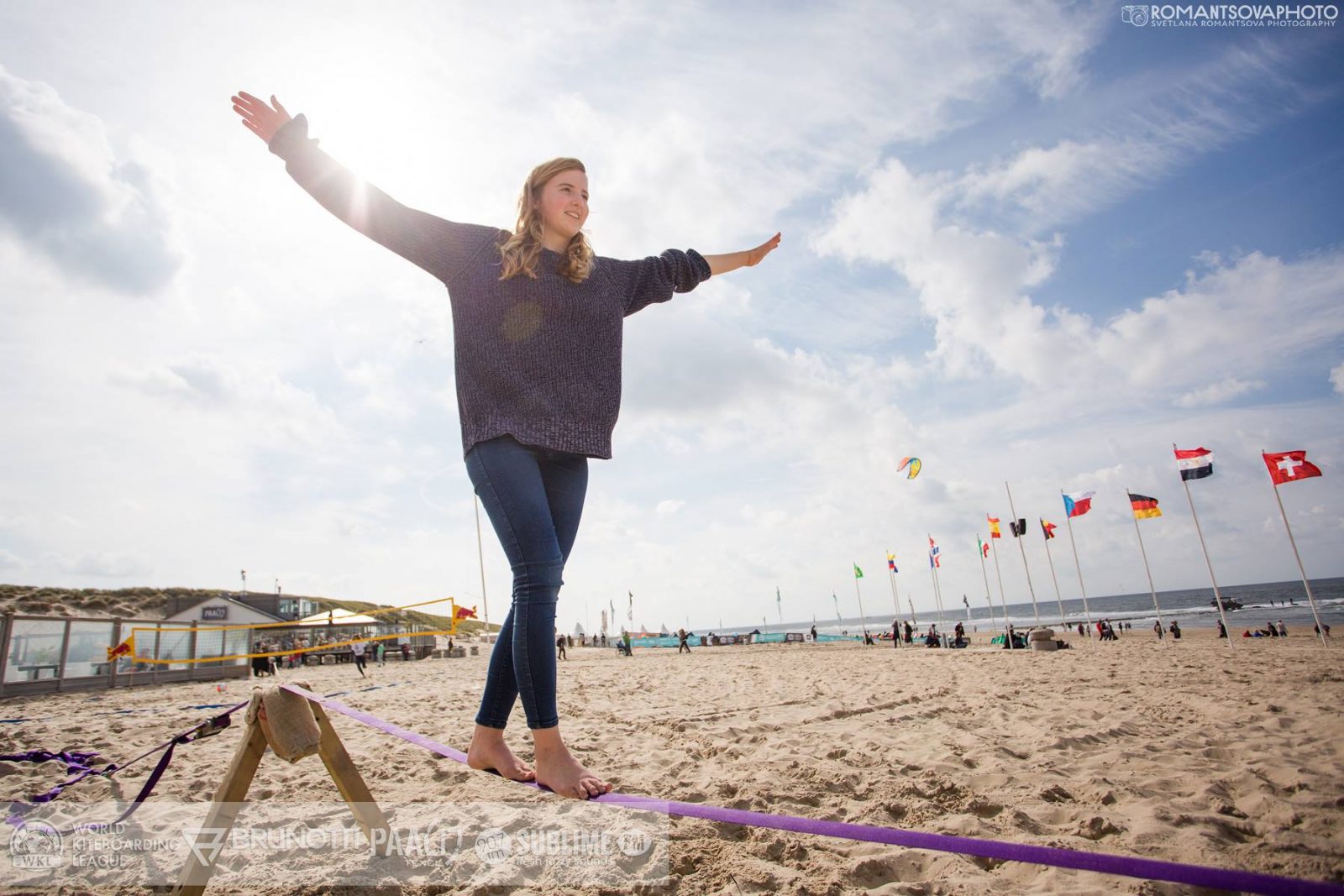 Holly Keenan passing the waiting period on a slack line

As the first women’s heat to hit the water it was a subdued affair as the girls got the measure of the conditions. Both Van Der Ark and Hartog being less experienced competition riders struggled to land tricks beyond a respectable Blind Judge from each of them. The surprise was that Rita Arnaus was also struggling in the light winds and had the same problems but landing the s-bend part of an s-bend to blind attempt gave her the points to take the win. 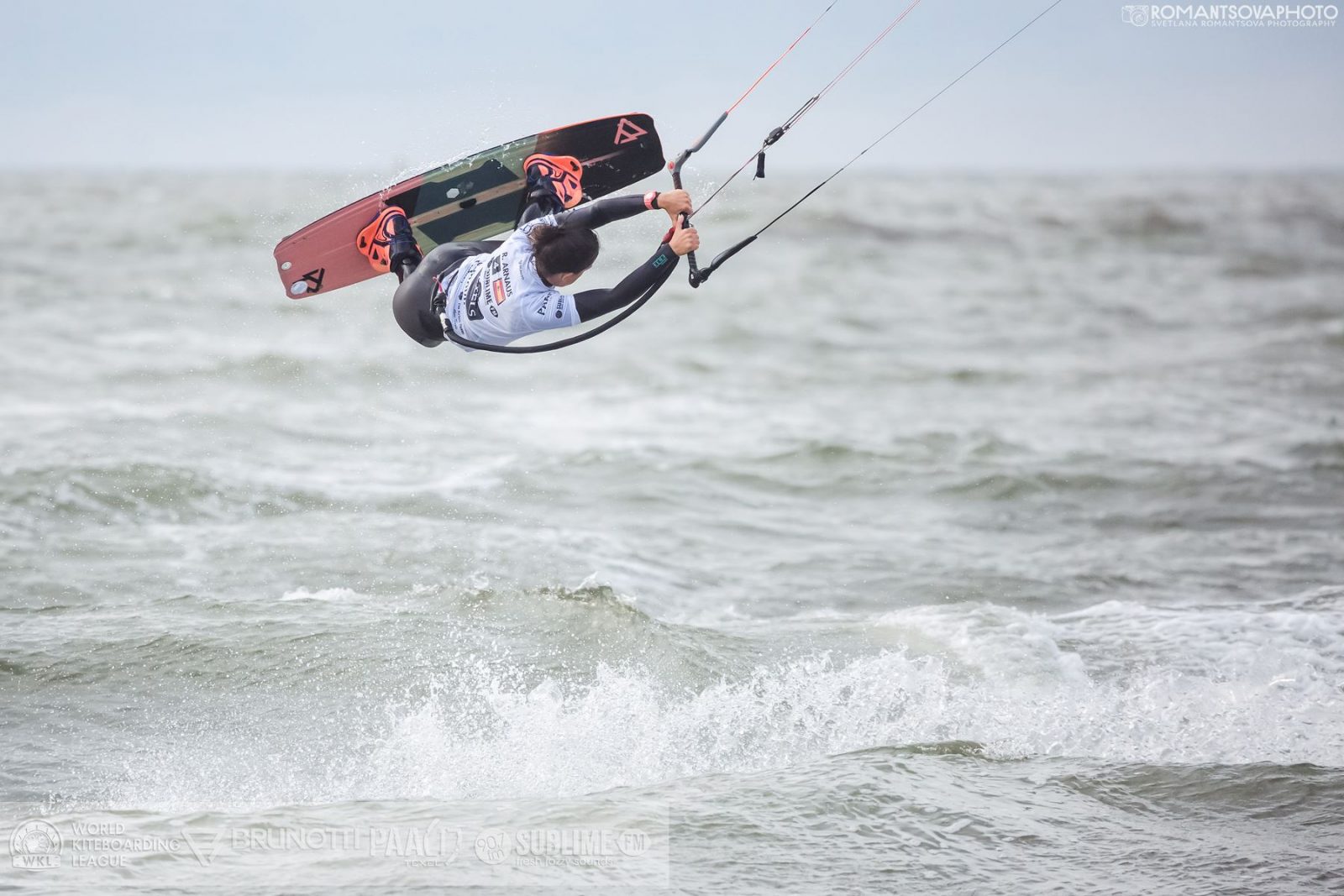 This heat was a very different affair and a close battle between newly qualified Dutch rider Vera Klabbers and the experienced Therese Taabbel.

Both girls matched each other landing Blind Judge, S-bend to blind and Back to blind for their first three tricks, but then two crashes and an uncompleted trick form Therese left the door open to Vera who landed a 313 she would likely not have been too proud of, but landed nonetheless, and then closed the heat and sealed the win with a Slim chance. 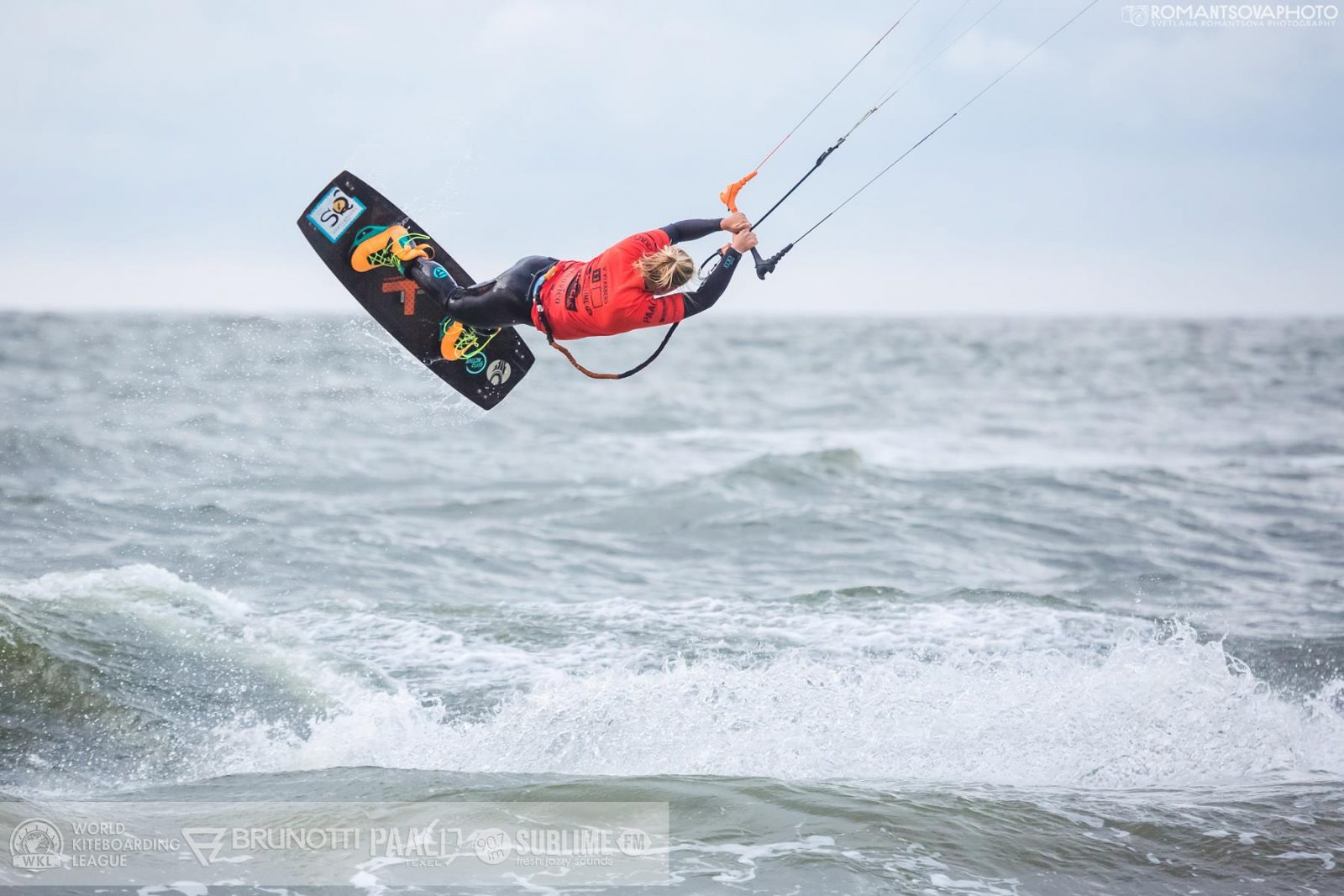 We must not forget the New Caledonia rider Marine Duprat who has so impressed us in the past in strong wind conditions and rode well but could just not quite get the tricks needed to stay in contention. 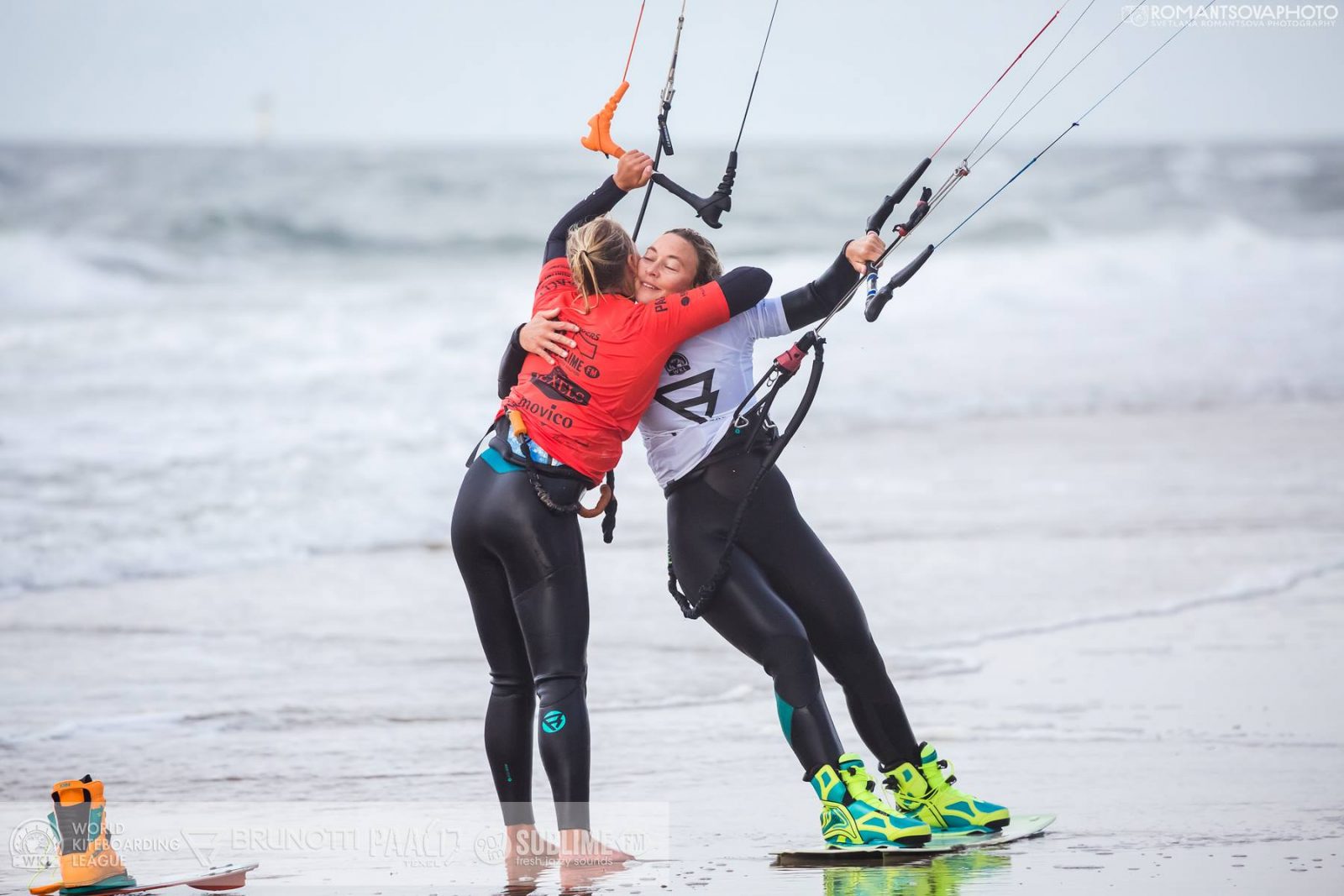 The much anticipated battle between Mikaili Sol and Isabeau Galiart was the focus of this heat and Mikaili did not disappoint coming straight out of the blocks with a Back mobe with the pass done in the air scoring her the highest female trick of the day with a 7.63.

Clearly her education with the World Class Kiteboard Academy has not been going to waste.

Isabeau replied with her trademark consistent tricks which might not win her points for amplitude but ensure she is a tough competitor to beat as her score builds with each trick.

Two crashes from Mikaili followed and then a supersonic spinning Blind judge 3 (or backside 313 as it is called in competition) bought her level with Isabeau with half the number of tricks. 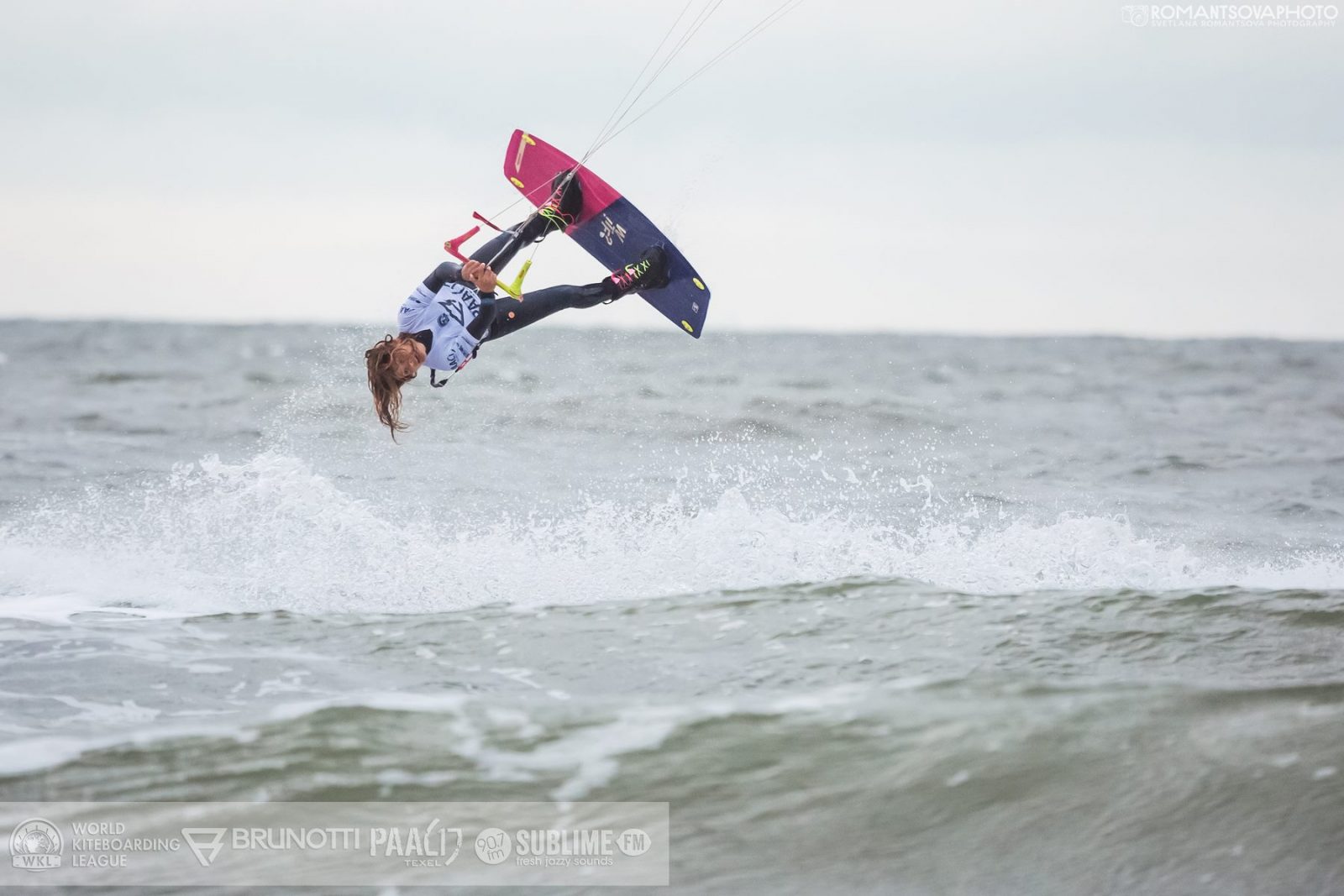 Unfortunately for her a crash and an uncompleted trickfollowed as Isabeau notched up a 313 and Hinterburger mobe to take the win.

Also in this heat were two newcomers to the WKL, Holly Keenan who finished in the top 3 in the UK Nationals this year and Kristina Belogorskaya. 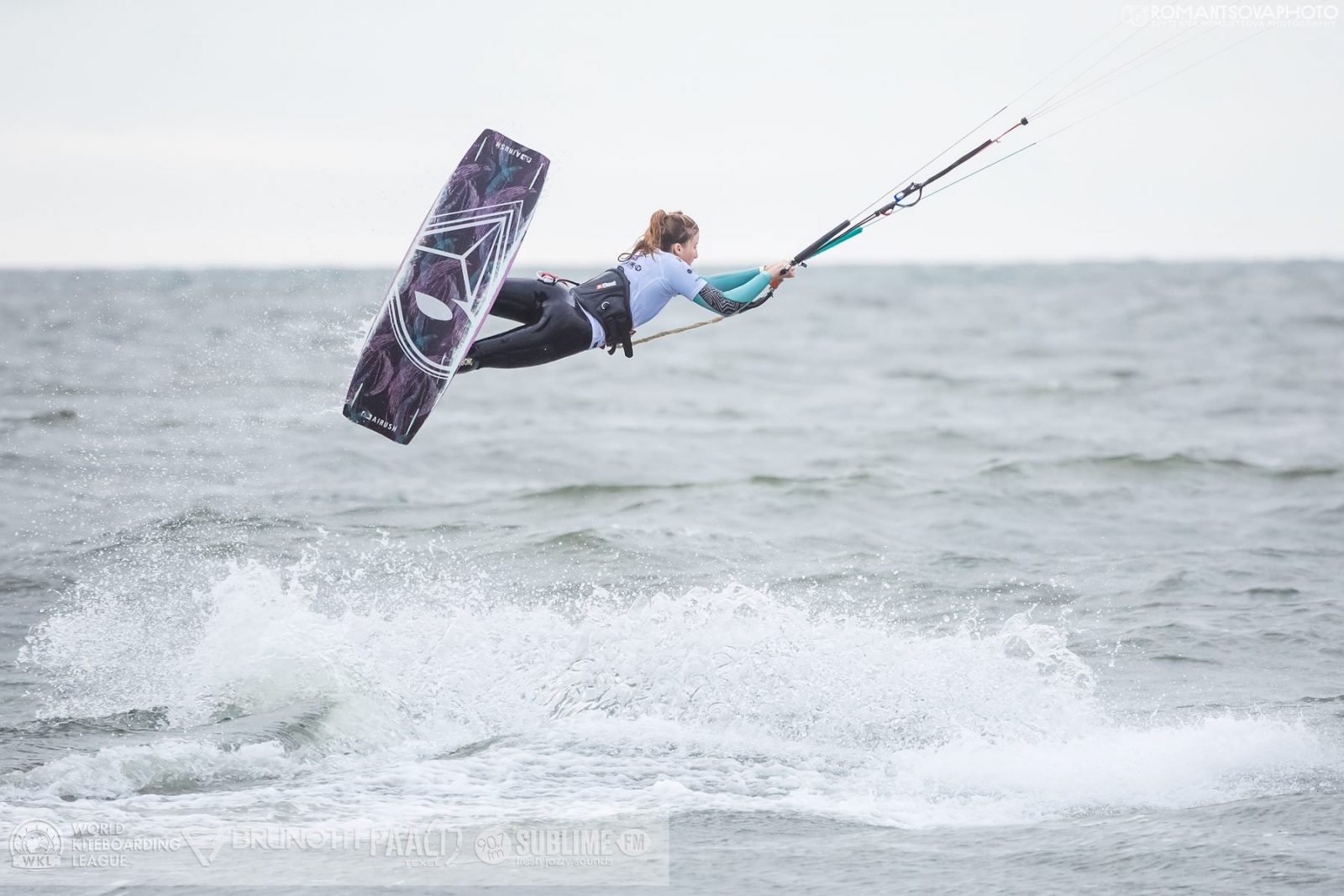 Both rode extremely well given the conditions they found themselves faced with. Kristina came firing out of the blocks with an S-bend to blind and Holly scored herself a notable blind judge, but unfortunately neither girls were able to make a mark on the leading two as they gained some important competition experience. 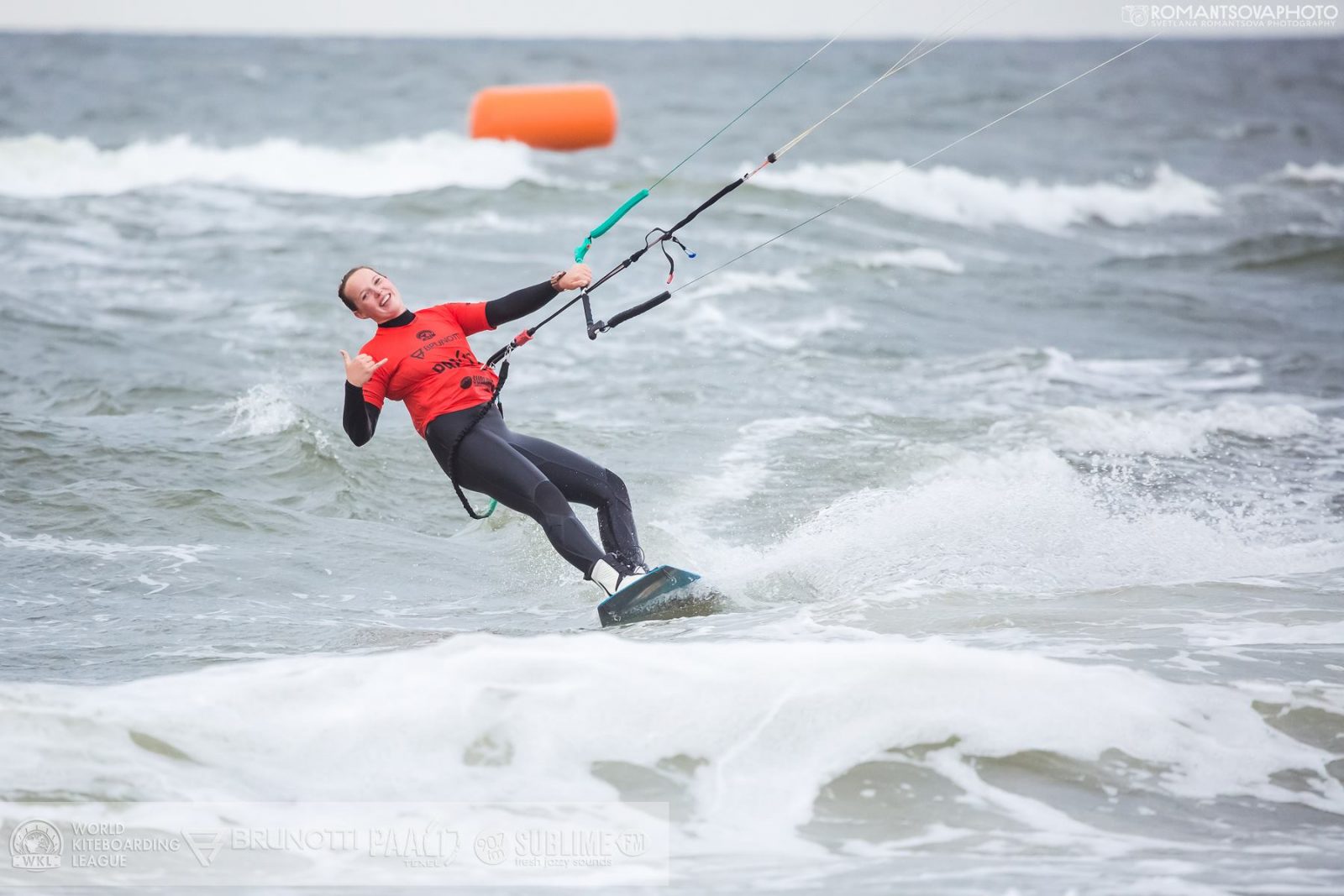 The final heat of the day looked to be a battle of the French riders from New Caledonia with Maureen Castelle and Pauline Valesa facing off against each other. However the young Dutch Junior champion Pippa Van Iersel kept them more than honest as she showed her trademark ‘go big or go home’ style and was for the first time in major competition in a while, riding without an injury. 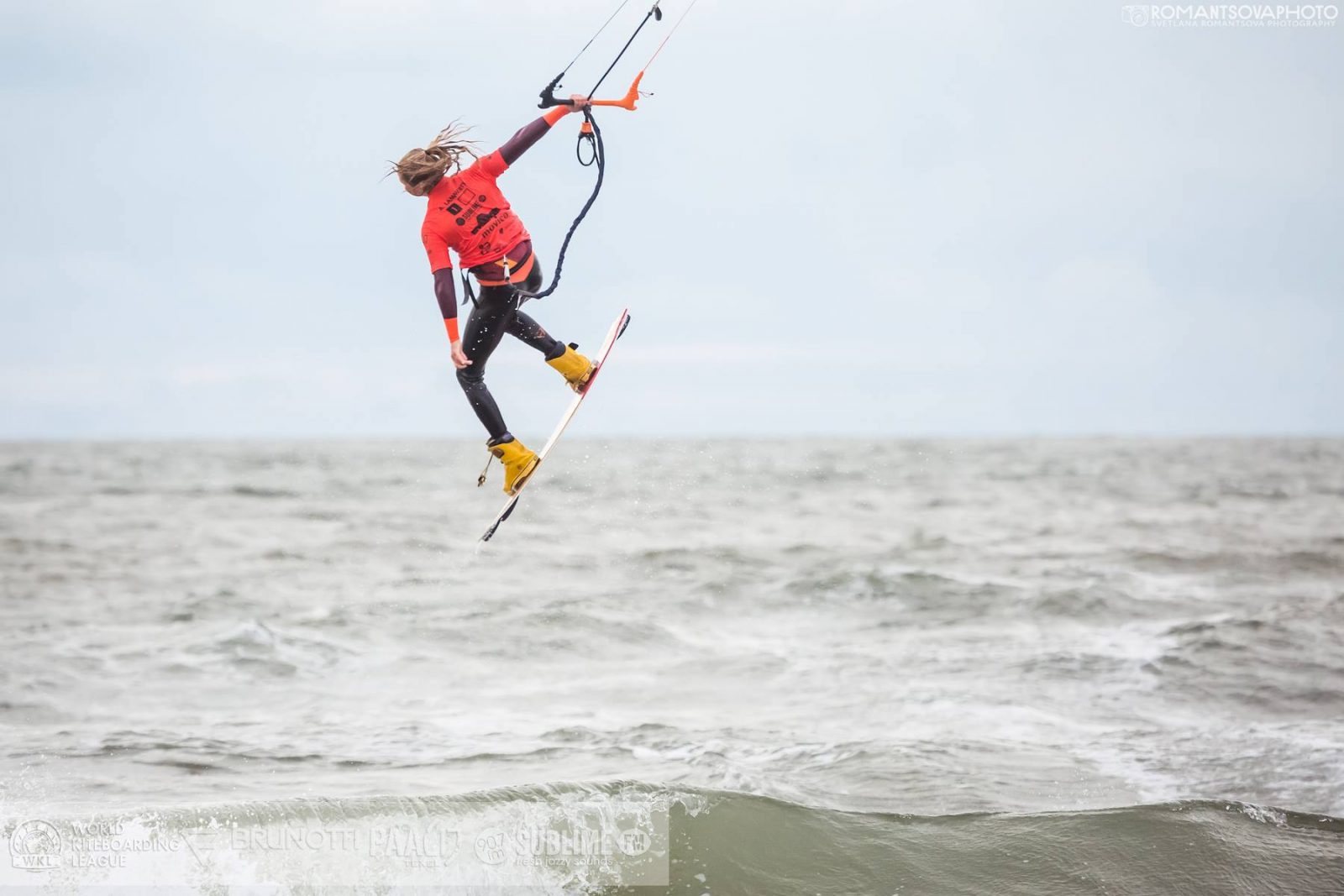 It was Pauline who held onto the lead for all of the heat with Maureen close behind, but a 6.9 scoring Blind judge 3 from Pippa along with a double s-bend to blind kept her firmly in contention. 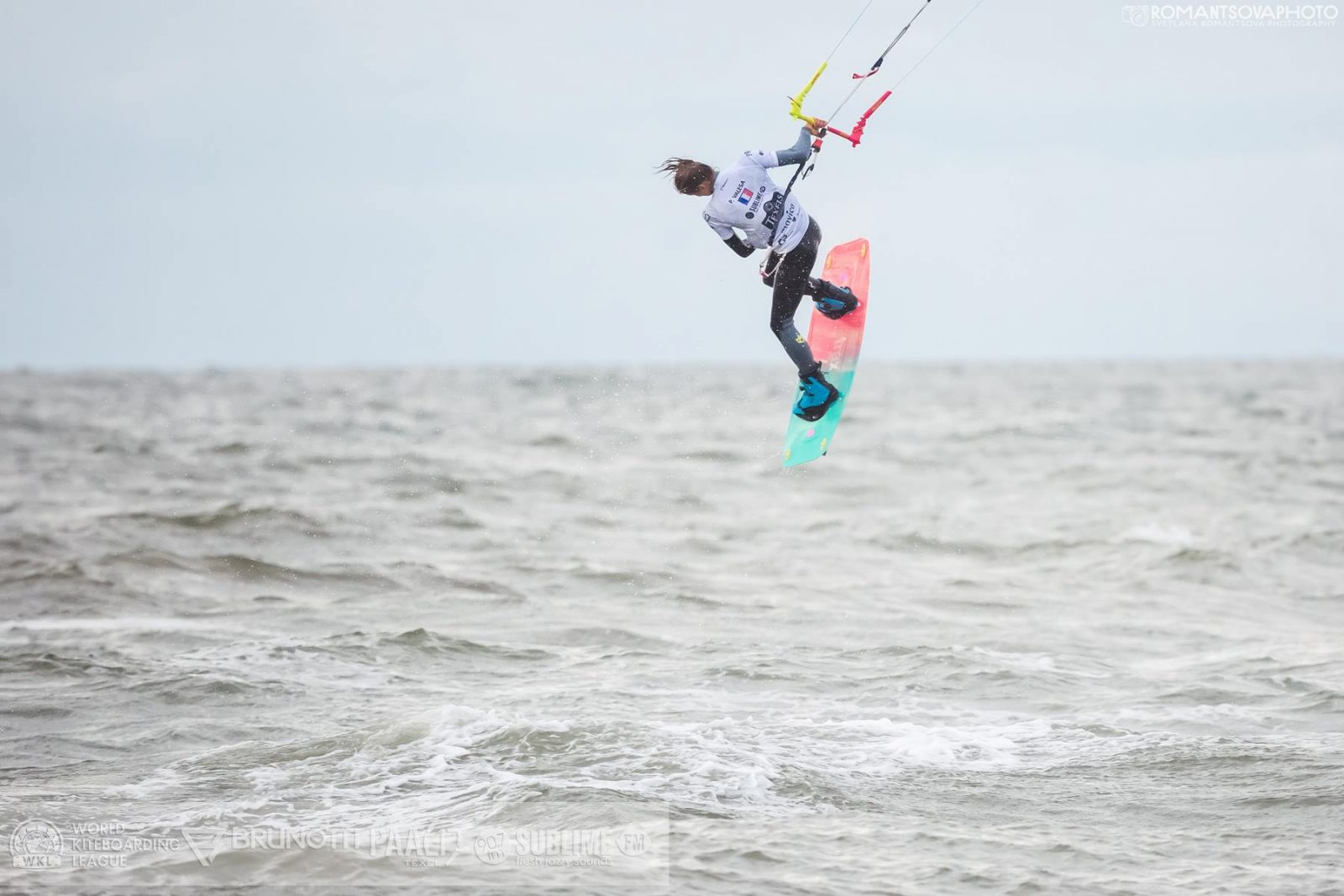 However it was Maureen Castelle who took the initiative after crashes from both other girls on their last trick to seal the win with a Hinterberger mobe that scored her an impressive 7.5, just short of the trick of the day, but more than enough to push a likely surprised Pauline Valesa down to second place. 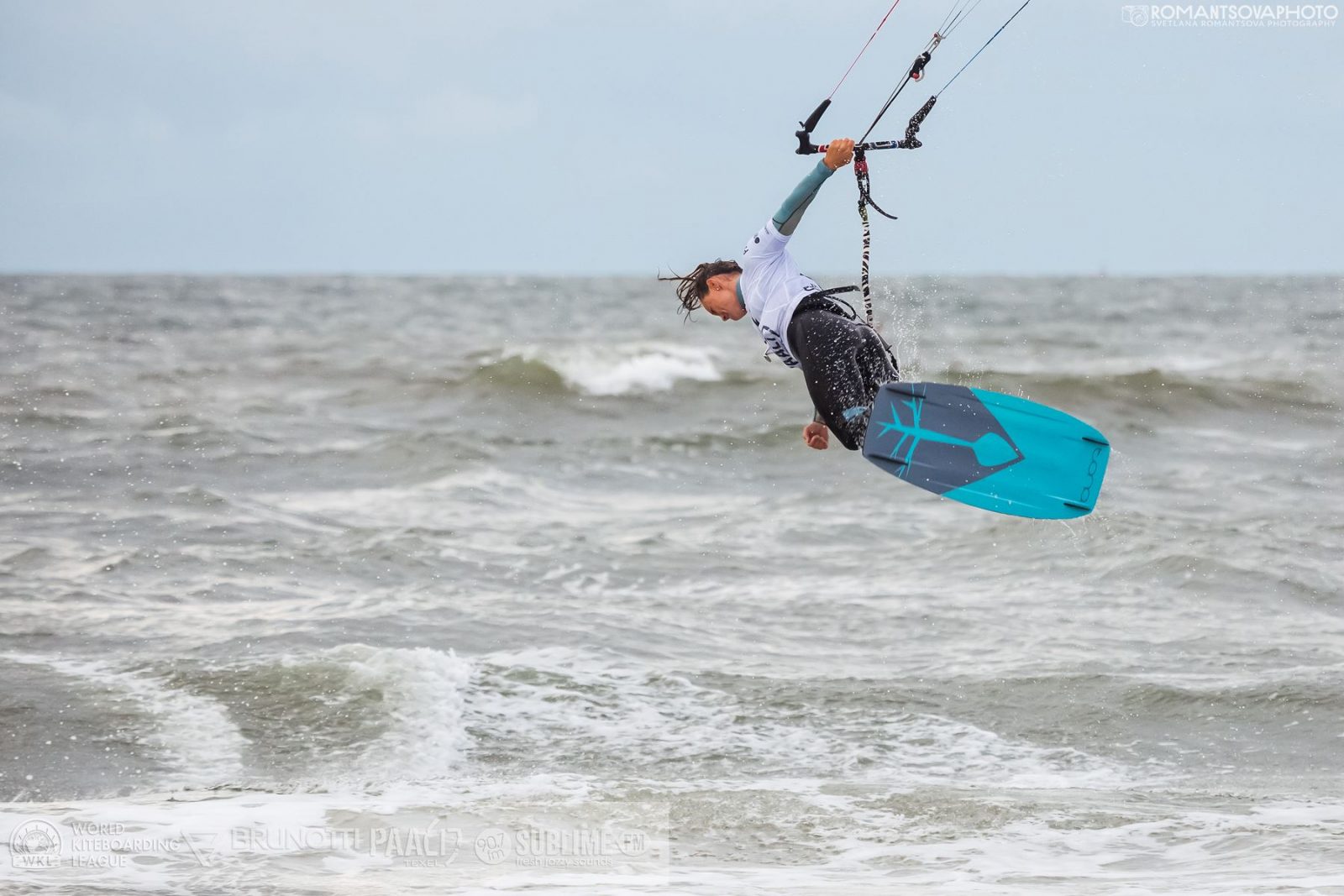 That bought the daylight and competition to a close and leaves the way clear for the main Elite League event to get going in the morning as long as the wind comes to play.

You can follow all of the event live on the World Kiteboarding League Facebook page and also on the Sista.zone Facebook page where we will share the live stream as soon as the girls get going. 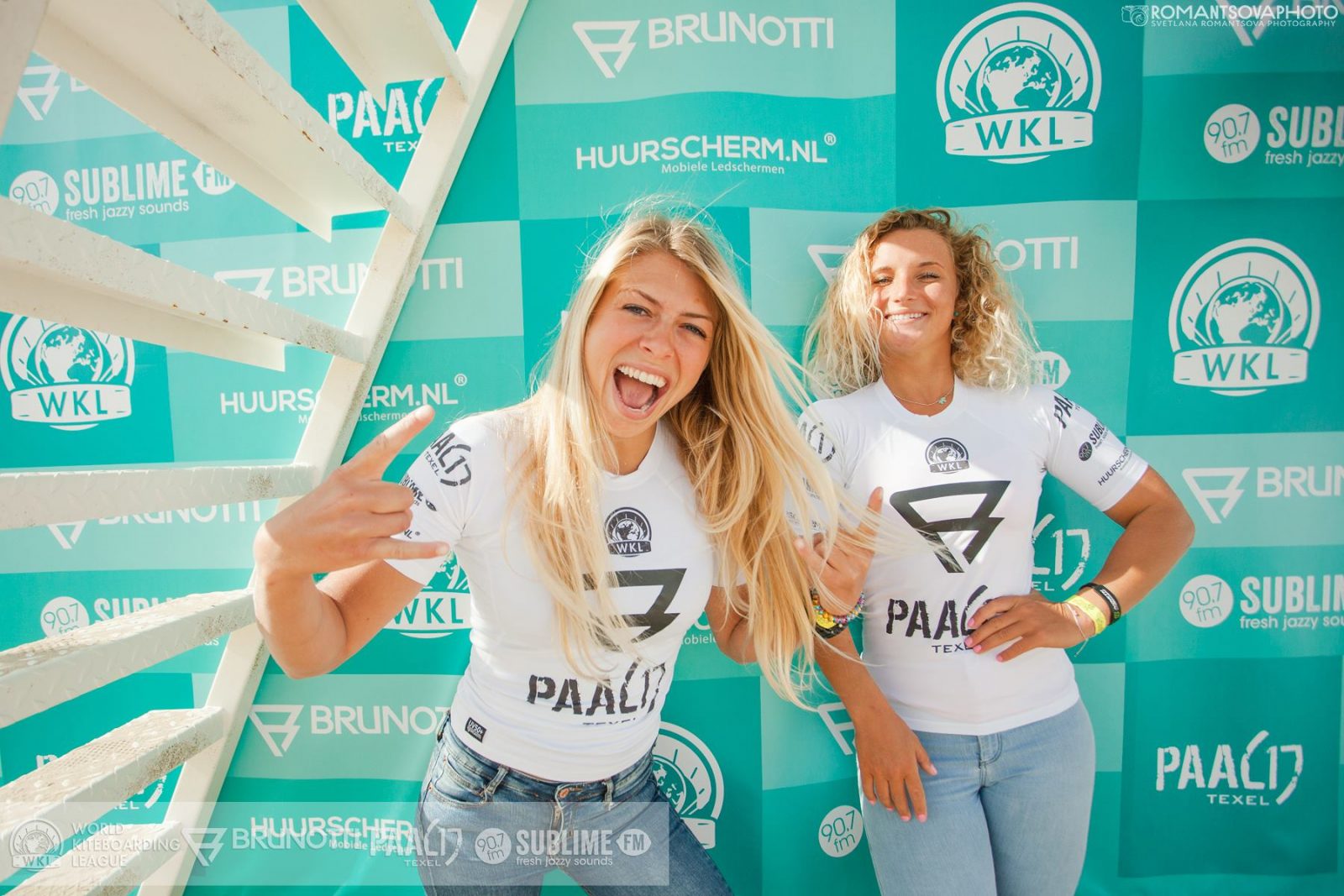